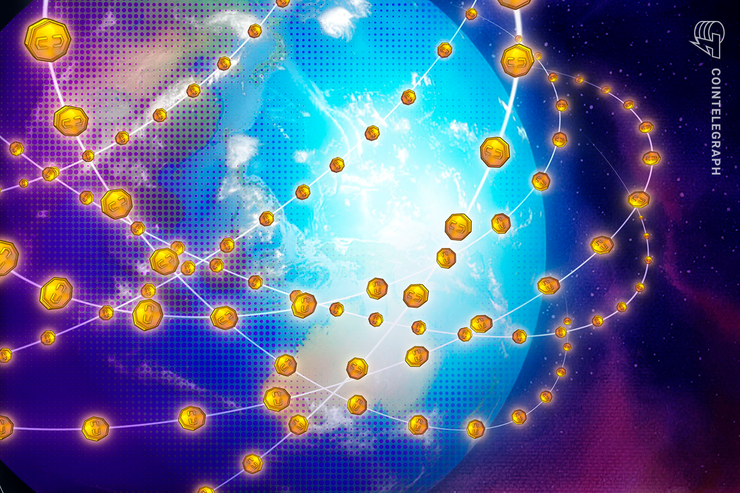 There’s no easy way to buy, send or spend cryptocurrency in person — not even for a slice of pizza or a cup of coffee, or so it’s been said. Meanwhile, the number of physical merchant locations that accept crypto payments keeps growing.

As of late October 2019, 15,558 business venues worldwide were accepting Bitcoin (BTC) as a method of payment, up 18% from a year earlier, according to Coinmap.org. The crowdsourced heatmap, devised by Satoshi Labs in 2013, draws on input from consumers and merchants. 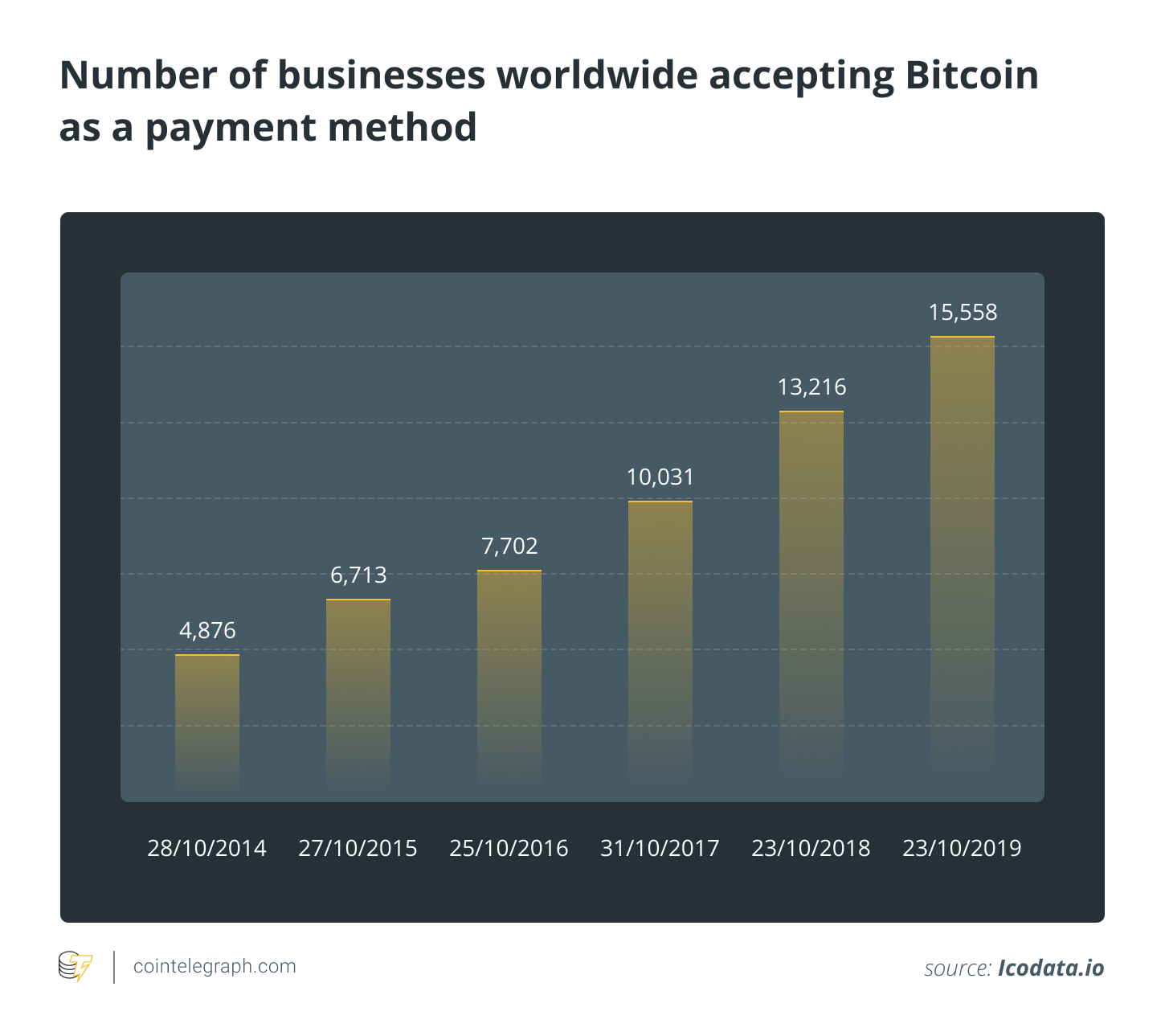 It also offers up some surprises. While Europe remains the hottest continent for in-person Bitcoin transactions, the most torrid city is now Ljubljana in Slovenia, with 314 venues. Last year, Prague held that distinction. As reported by Cointelegraph, more than 530 locations across Slovenia and Croatia are now accepting crypto on a daily basis, including hotels, shops and restaurants — a big increase from the 240 locations reported in January 2019. The list includes Tus, one of Slovenia’s biggest grocery chains. Ljubljana even has a shopping mall called “BTC City.”

The extent to which the Republic of Slovenia, with only 2 million citizens, is becoming a hub for crypto can be seen in the table below, which ranks Bitcoin-accepting businesses by city on a per capita basis. That is, the size of the population is being controlled, since it would be expected for a city like London with 8.2 million residents to have more Bitcoin-accepting venues than Ljubljana with only 275,000 residents, even though it doesn’t, London has a mere 103 businesses. 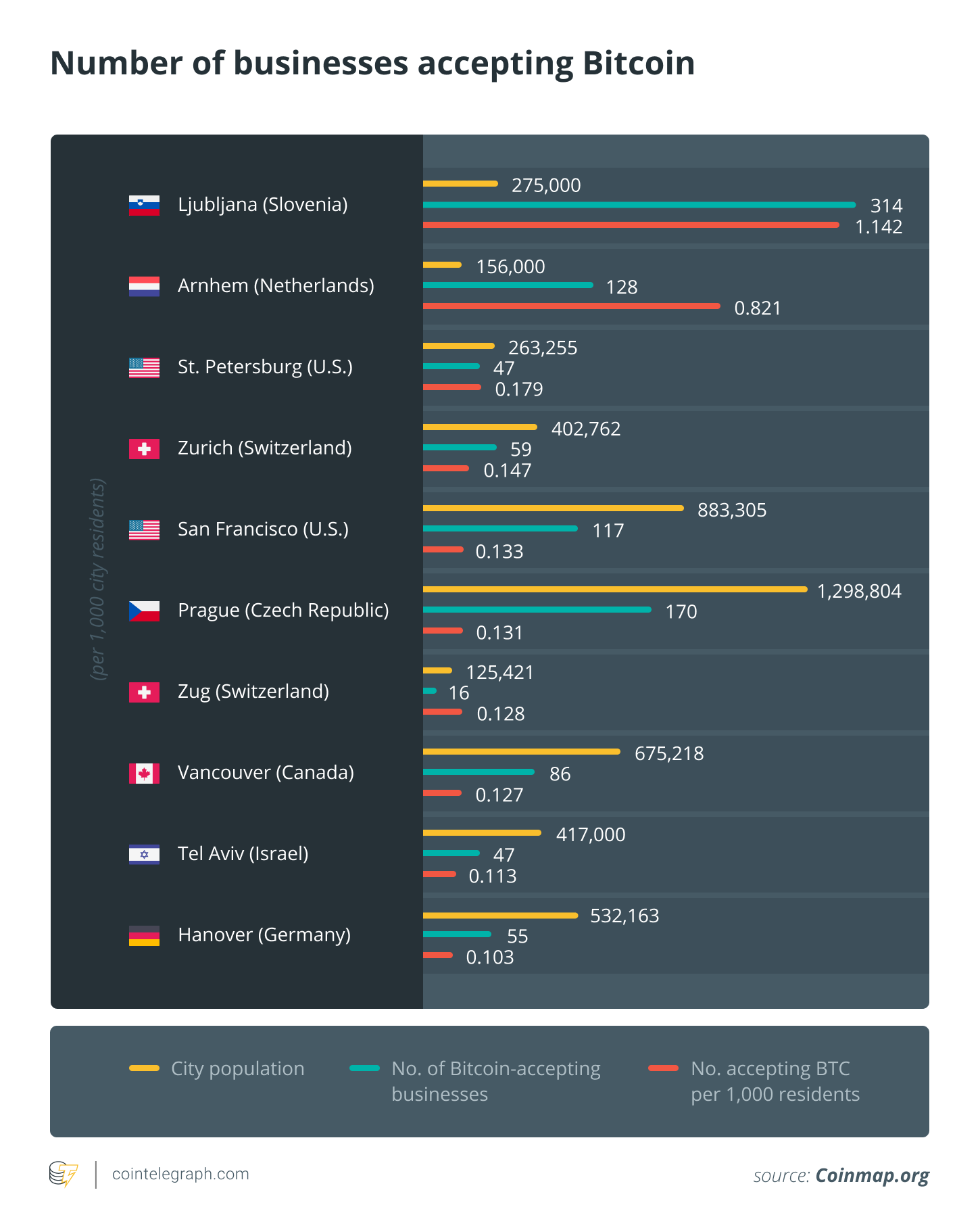 The table shows that Ljubljana has more than 10 times the number of Bitcoin-accepting locations as does San Francisco after controlling for population. St. Petersburg, Florida has more than 11 times as many places to spend crypto as New York per capita. Here are the top 10 cities in gross terms (i.e., not adjusted for population): 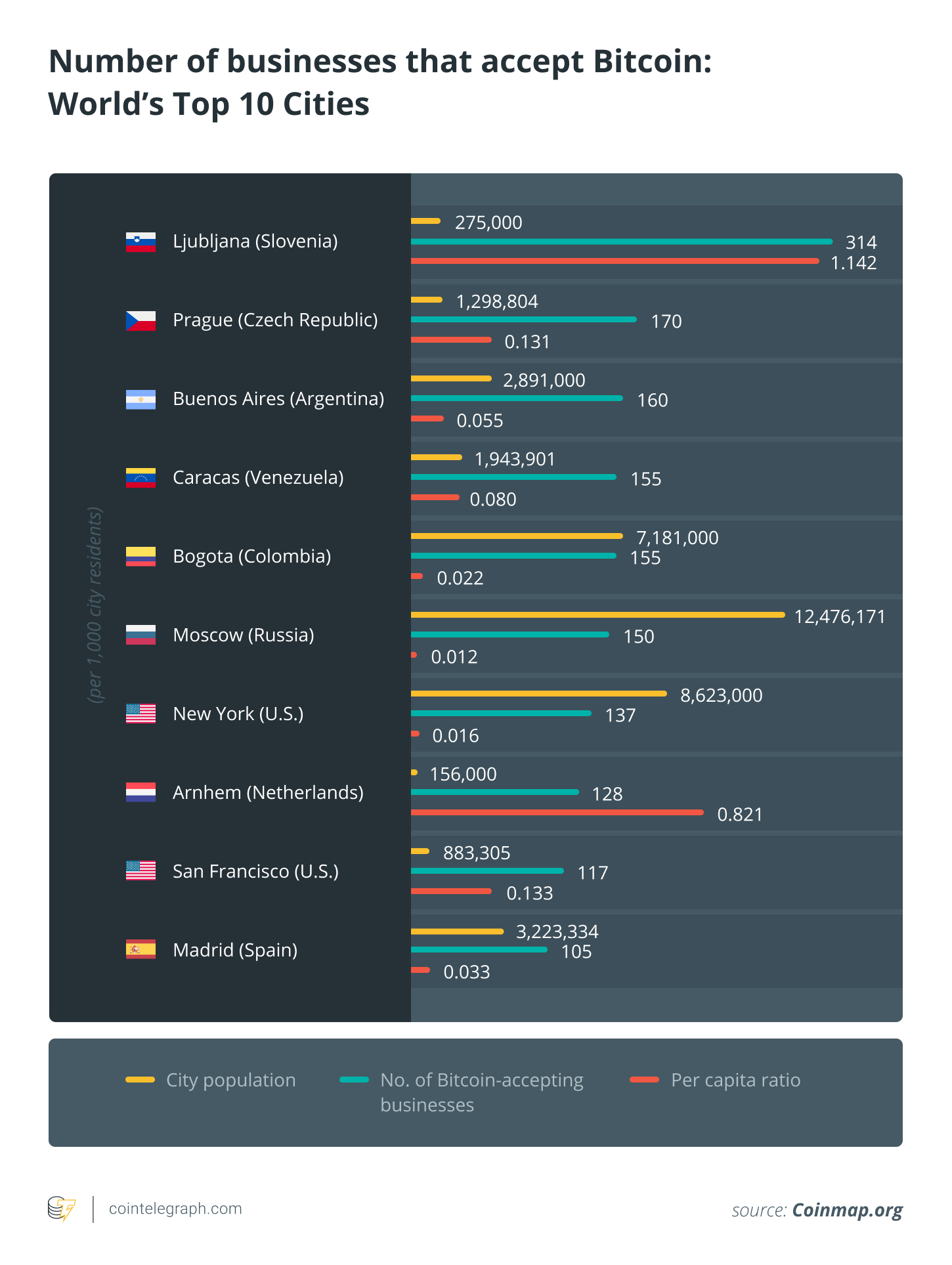 This table is dominated by European, North American and South American cities. Switzerland’s businesses have long been (relatively) receptive to crypto, and this is reflected in the larger size of its Bitcoin-accepting businesses. Zurich’s Dolder Grand, a luxury hotel, takes Bitcoin, as does the Kessel car dealership in Zug.

Related: Retailers Around the World That Accept Crypto, From Pizza to Travel

In Prague, one can reportedly rent apartments and attend films paying in crypto. The Valmont, a party bar in the city center, invites visitors to “drink champagne and dance on the table” — and accepts Bitcoin. In economically distressed Venezuela, Traki, a big department store, is now taking crypto — at least according to one user who purchased clothing and school supplies with BTC.

Bitcoin-friendly businesses are to be found in Australia’s two largest cities, Sydney (55) and Melbourne (66), but there are relatively few in Asia given its size apart from Seoul (71), Hong Kong (39), Bangkok (52) and Tokyo (81), the continent’s leader. Africa remains almost “heat-free” on Coinmap’s heatmap. Cape Town, South Africa, the continental leader, has 31 businesses accepting Bitcoin.

There have been many reasons offered why crypto doesn’t work for everyday transactions. When online payments company Stripe, one of the first major infrastructure networks to support Bitcoin payments in 2014, exited that business last year, it cited among other reasons the transaction clearance times, which were averaging 60 minutes in mid-2018, and had sometimes dragged on for days. “By the time the transaction is confirmed, fluctuations in Bitcoin price mean that it’s for the ‘wrong’ amount,” the company said.

Some of the newer payment platforms, however, claim that crypto payments made in BTC and Ethereum (ETH), or other cryptos, can be almost immediately converted into a merchant’s local currency, eliminating exposure to sudden price movements.

Hupayx, a South Korean startup, for instance, offers a cryptocurrency point of sale payment solution through a partnership with KIS Information Technologies. It will soon be implemented at more than 400,000 locations in Seoul area alone, according to Aibek Amandanov, the head of global marketing. He told Cointelegraph that duty free shops will be among the first businesses, adding:

“HUPAYX members can transfer crypto instantly among members; when transferring outside our ecosystem it takes longer. When paying at the counter at HPOS supported merchants, we only charge a 0.5% fee and it takes less than 6 seconds to transact.”

Bitcoin transaction costs have dropped dramatically over the past two years — high fees were another reason cited by Stripe for leaving the business. The average Bitcoin transaction fee reached a high of $54.90 on Dec. 21, 2017, but on Oct. 22, 2019, it was less than one hundredth that amount: $0.53 per transaction.

There are other impediments, though, before in-person crypto payments become part of everyday life. In South Korea, it is prohibited to directly pay in crypto at any store or business location, Amandanov told Cointelegraph: “In response, we made our wallet so that the crypto (BTC, ETH, ETH-20 tokens) can be converted into points and can be paid with those.”

In the U.S., there can be tax issues because the IRS considers Bitcoin and other cryptos an asset, not a currency. Every time a sale takes place, it can be considered a tax event. How to deal with this? Casual Bitcoin users should consider using a reputable crypto wallet provider to help document all transactions, according to tax expert William Perez. Wild variations in crypto prices haven’t helped either. As a spokesperson for Chainalysis, a blockchain analysis firm, explained to Cointelegraph:

“One significant impediment is price volatility. That’s likely behind the rise in popularity of stablecoins, and trust in stablecoins could lead the way to increased commercial use… We think a lot of the benefits of using cryptocurrencies versus traditional payment methods are still to come because cryptocurrencies are more programmable.”

“There’s been definite technical progress in the past year, but no massive adoption on the retail level,” Nick Saponaro, co-founder and chief information officer of The Divi Project, a blockchain startup, told Cointelegraph. “People just aren’t willing to spend an asset with such upside potential.”

There is more in-person crypto spending in places like South America and Africa, Saponaro added. In Venezuela, ravaged by hyperinflation, the local currency is useless, and people are turning to cryptocurrencies to purchase groceries. In economically distressed parts of Africa, people use BTC to purchase vehicles, he said.

All told, a different popular psychology may have to take hold before people begin to spend cryptocurrencies on goods and services more substantial than a pizza slice or a cup of coffee, Saponaro suggested.

Consumers will have to see others purchasing durable goods like automobiles and home appliances with Bitcoin or Ether or other cryptos. When they do, some price stability may be achieved, and then more consumers might jump in and spend crypto, in a kind of virtuous cycle.

Tiffany Fong flames Celsius, FTX and NY Post: Hall of Flame
Here’s what the Federal Reserve’s 25 basis point interest rate hike means for your money
Stocks making the biggest moves before the bell: Apple, Alphabet, Amazon, Starbucks and more
How to protect yourself from tax fraud and scams, according to cybersecurity experts
Before you enroll in Medicare, what to know about new rules that eliminate coverage gaps