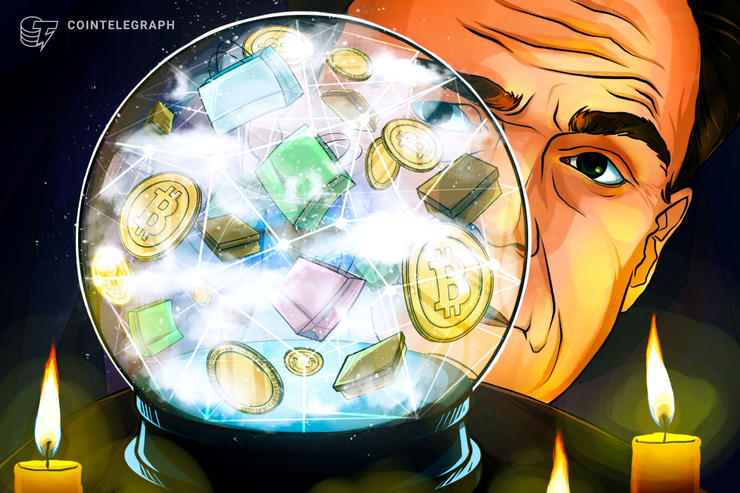 Bitcoin price (BTC) has been a popular topic this week. After the monstrous run from $7,400 to over $10,500 on Oct. 25, it certainly looks as if last week’s article indicating the early stages of a bullish reversal came to fruition.

As usual, there has been wild speculation on Crypto Twitter that the Bitcoin price pump was a direct result of Chinese President Xi Jinping calling for an acceleration in the development of blockchain technology as reported by Cointelegraph last week.

Whilst this was good news to hear, it’s doubtful that it was the sole reason for Bitcoin price making one of the largest price leaps in its 10-year lifespan. Instead, it’s more likely that the rally was a culmination of several factors including the China news, as well as strong technicals.

Many traders will roll their eyes, but it can’t be ignored. Initially posted on Jan. 21st, 2019, this well-known meme has been astonishingly accurate so far this year.

The meme reads as follows:

“The bottom was December 15 2018. Just look at the charts. We are in the bull market. We are currently in the last 3 months of accumulation stage. After that we slowly rise and rise. Then we will boom. Screen cap this.

With just 4 days left for the prophecy to be fulfilled, one must ask whether or not the current price action was predicted by the above prophecy. It certainly wasn’t on any charts I was looking at. However, the phenomenon does lead me to inquire about exactly who the early Bitcoin adopters are. I don’t mean the ones that take to Twitter and are public about it. I mean, who are the sort of people that invested and mined Bitcoin in the early days and keep quiet about it?

The answer is geeks, and what do geeks enjoy watching? Anime, just like the avatar on the anon post. So let’s think outside the box for just a moment, and consider whether a reclusive individual or group could be controlling Bitcoin price with their early stash.

It’s not that far fetched for an asset that was once worth less than a penny and now trades for approximately $9,600. All someone, or a group working collaboratively would have to do is make the manipulation look less obvious by timing their moves to coincide with potentially market-moving news, much like the recent nod from President Xi to adopt blockchain.

Whilst it may seem a little like a tinfoil hat conspiracy, given its past accuracy I wouldn’t want to dismiss this meme prophecy just yet. Furthermore, Edward Snowden tweeted out the anon anime avatar shortly after Bitcoin’s meteoric move on Oct. 26. It does add weight to the reclusive Bitcoin holder theory.

However, one such theory that would explain both the Bitcoin pump and it’s volatility afterwards are the strange things happening with Tether (USDT).

Shortly before the Bitcoin pump on Oct. 25 Cointelegraph reported that the head of Crypto Captial was arrested in connection with the laundering of a drug cartel’s money. Given the close nature of the relationship between Crypto Capital and Bitfinex, and the $850 million that is missing from Tether reserves as a result of that relationship, it’s reasonable to assume that right now Tether could be a hot potato.

24-hours after this news broke, the Tether markets looked rather unusual, in some instances they were down by 5%

Was the huge Bitcoin price run from $7,400 to $10,500 a result of Tether being dumped into Bitcoin amid fears of an imminent collapse?

Shortly after Bitcoin price settled in the region of $9,500 there were wild wicks on the charts and a notable increase in Bitcoin trading volume.

As can be seen on the chart, the daily volume leaped from 120,000 BTC to 208,000 BTC being traded. Was this increase a result of traders capitalizing on an easy 5% gain based on buying discounted Tether and awaiting its return back to the dollar peg? Currently, Tether’s value has returned to $1.00 so a second pump could be on the cards very soon. 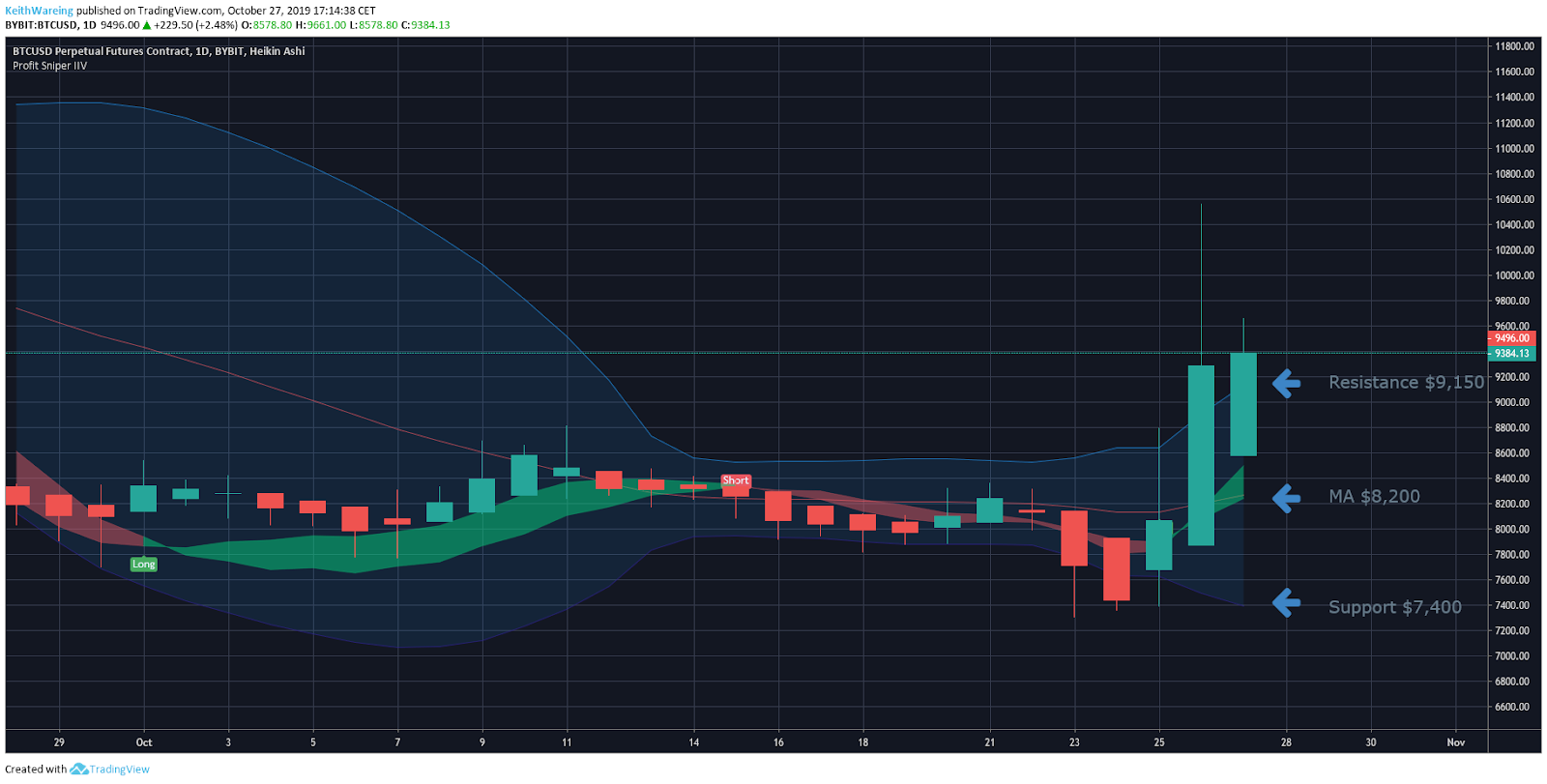 On the daily chart the Bollinger Bands indicator (BB) shows three levels of importance for the week ahead. The moving average (MA) is at $8,200, the support is $7,400 and the resistance is $9,150. At the time of writing Bitcoin price is $500 over the resistance as it’s currently trading over $9,600 and rapidly rising.

Since the resistance is broken, looking at the weekly chart provides a better idea of where the price could be heading next. 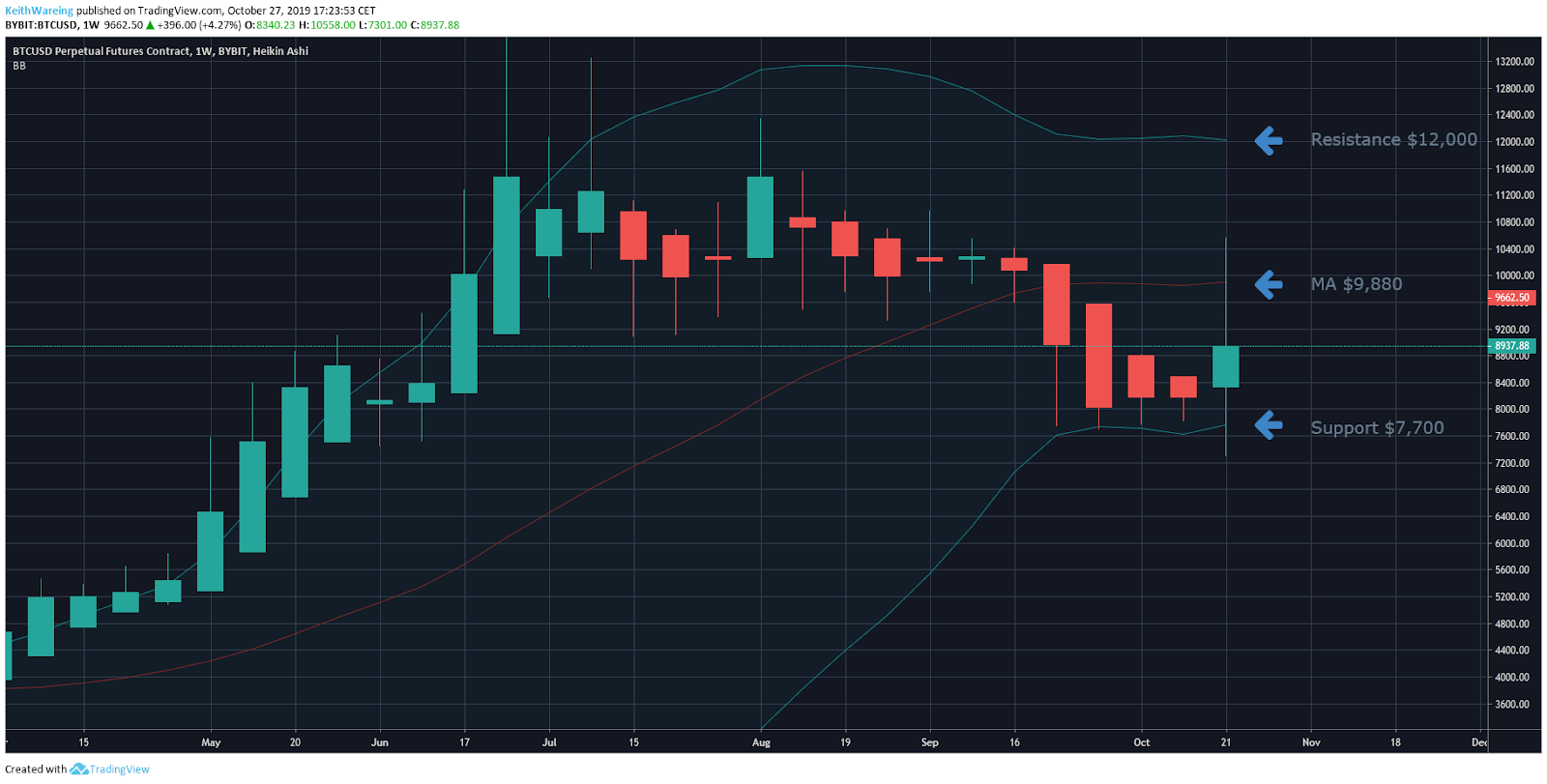 The weekly chart shows that Bitcoin is still encountering resistance at the Bollinger Bands MA which is around $9,880.

As the price continues to test this level of resistance it’s only a matter of time before the price does one of two things:

With some further exploration using other indicators, it is possible to see that Bitcoin price is witnessing a full bullish reversal. 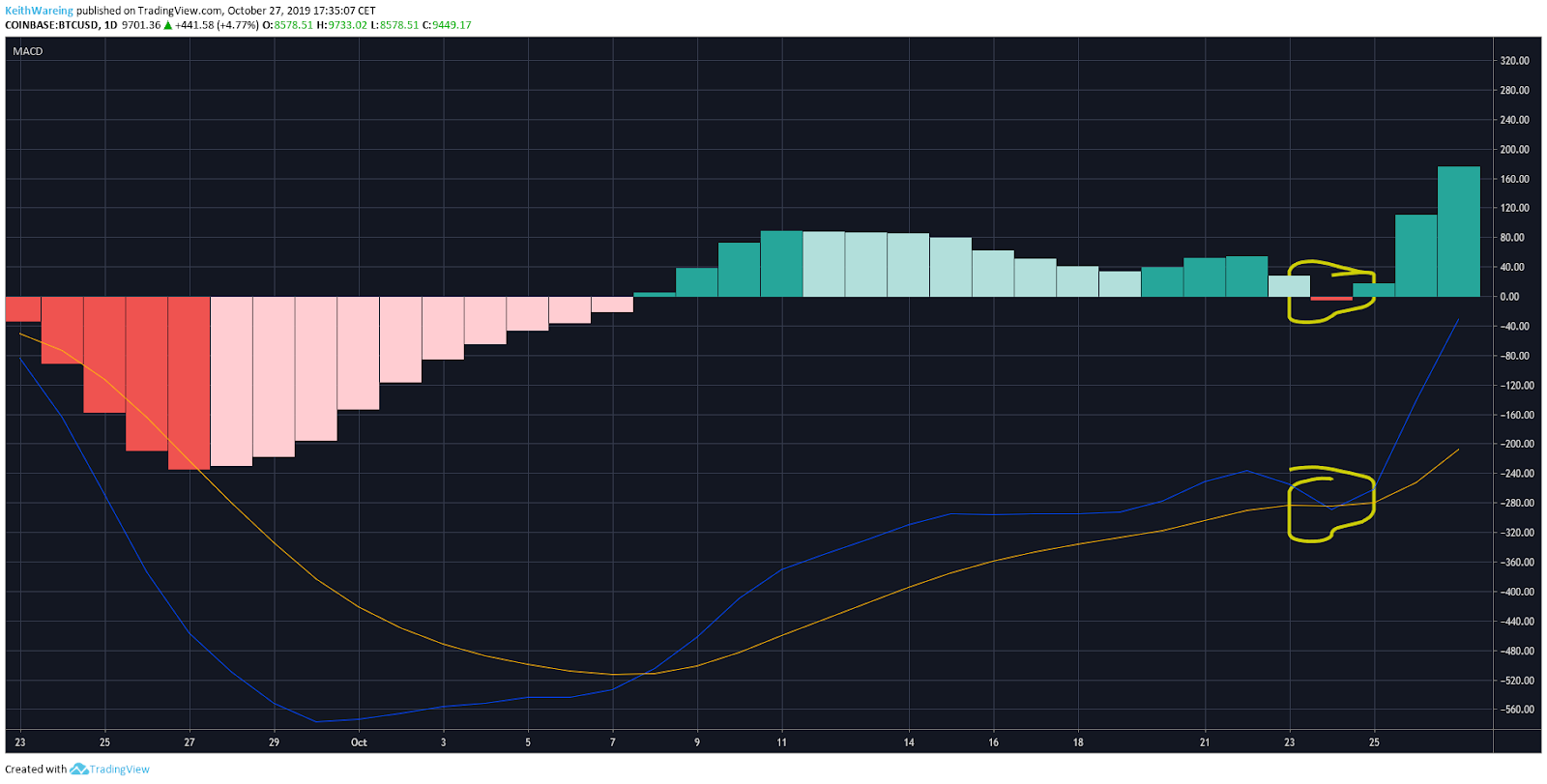 The daily MACD shows a complete reversal from bearish to bullish on Oct. 24. The strength of the candles on the histogram as well as the bullish divergence from the signal line erased all signs of a bearish crossover.

This in turn is changing the trend on the weekly MACD, however, it’s not quite there just yet. 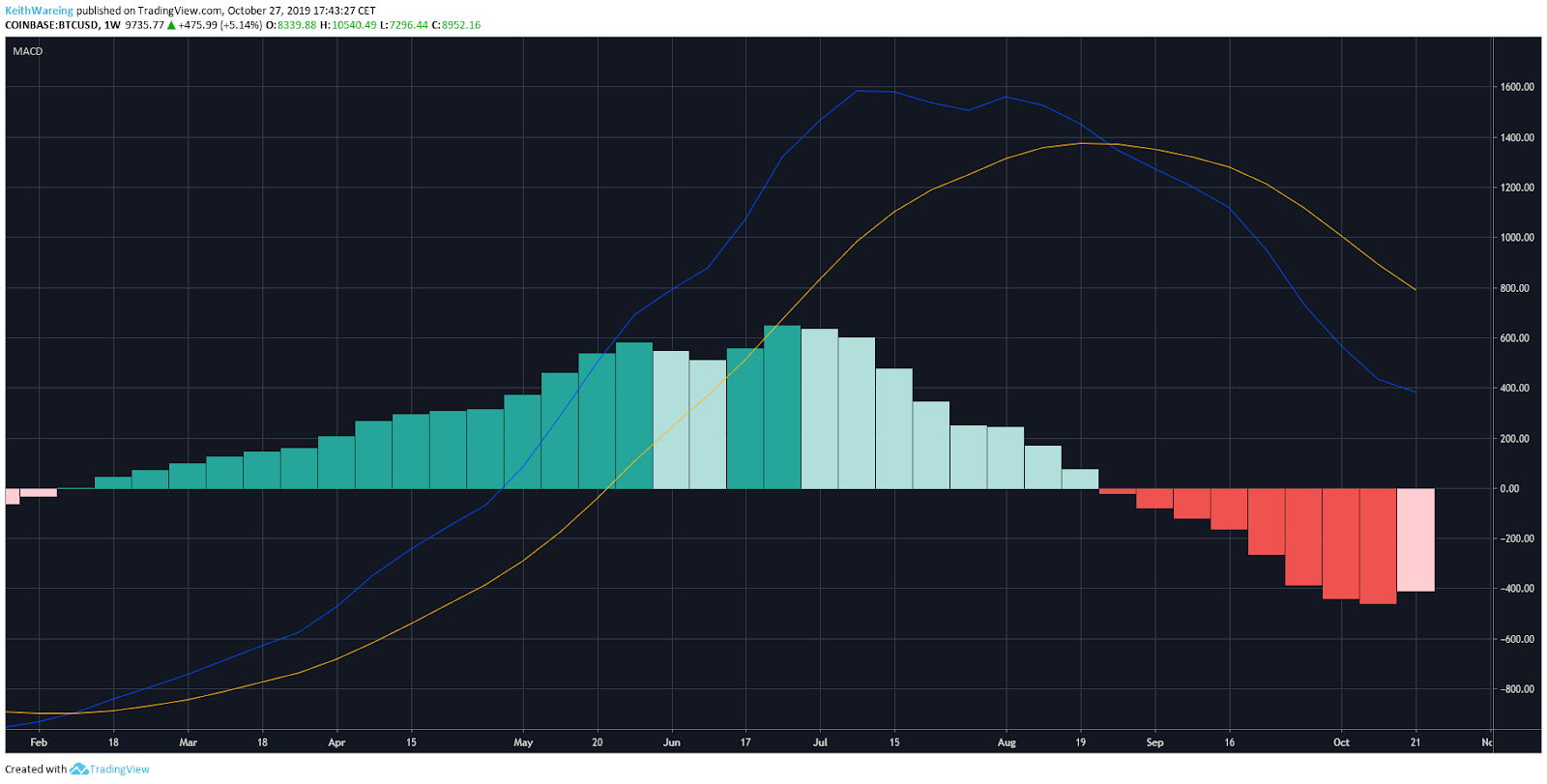 The weekly MACD is showing two early signs of a bullish reversal. The first is the blue MACD line starting to pinch, whilst it might look far away, the information displayed on the histogram could mean a dramatic change on the candle close tonight.

There is also a pale pink candle on the histogram. This would normally signal a few weeks of a slight upward trend. During this time the candles would gradually get smaller and remain pink until the price was higher than the last green candle.

However, the price action isn’t usually so violent, and last week’s move was so great that Bitcoin price may even print a green candle on the histogram tomorrow if it closes above the weekly MA of $9,880.

The last green candle was on the week commencing Aug. 19. This was when Bitcoin was trading between $9,800 and $11,000. If Bitcoin price continues to test the $9,880 resistance and breaks past it, there will be a huge change on the weekly MACD.

This would represent a massive buying signal to traders. This could realistically spark a rally to $12,000 or beyond, meaning bears are not winning this week. In fact, it doesn’t look like they will win next week either.

As with every big rally, there’s always a pullback, and usually the best place to look for this information is the Relative Strength Index (RSI). 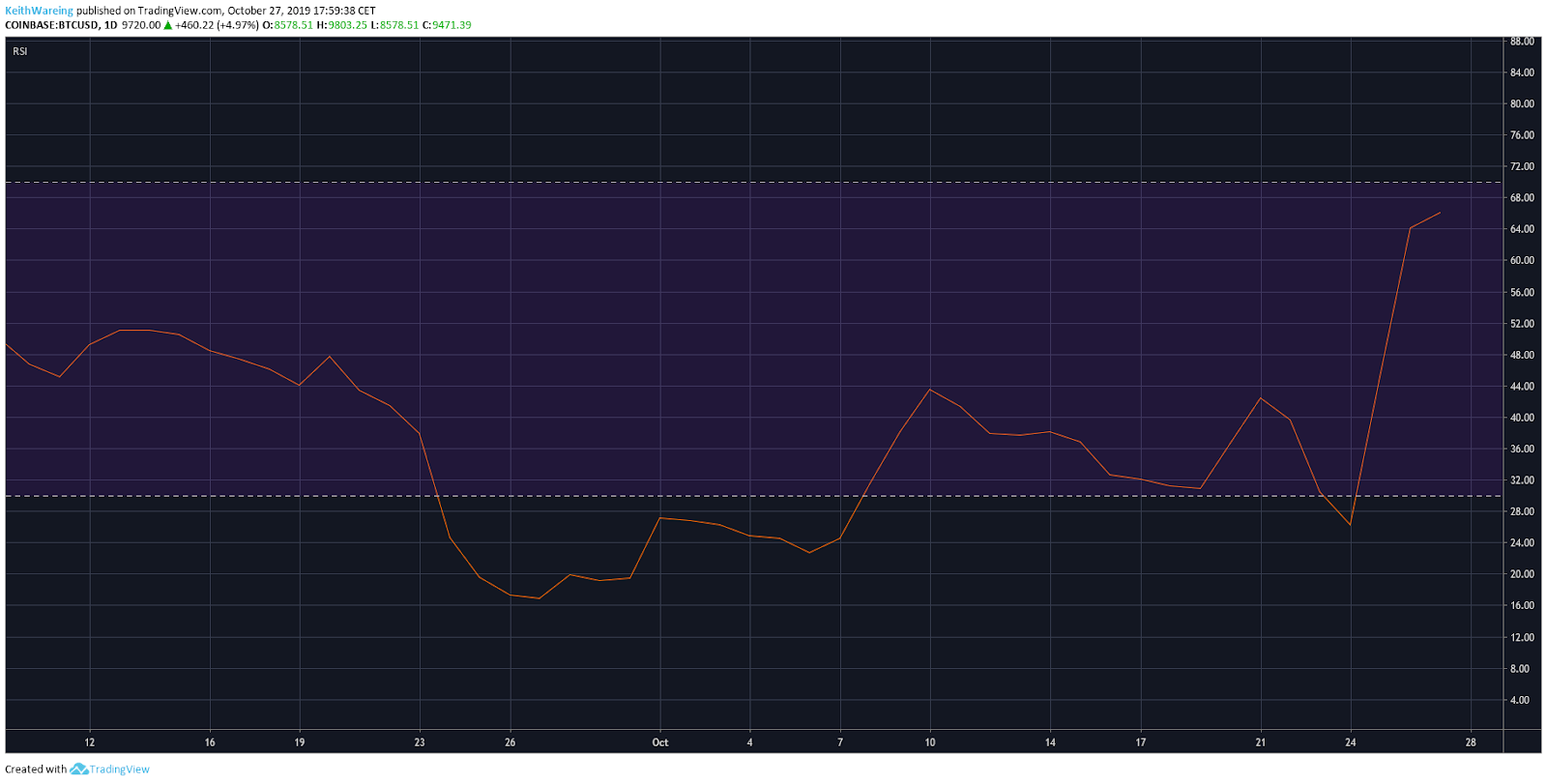 Typically a move such as the one witnessed on Oct. 25 would result in an RSI reading well over 70 which means Bitcoin has become overbought.

Amazingly, the RSI is now in the mid-60’s and this shows that there is room to grow. One would normally expect that after such a big price move, the asset would be ripe for a pullback. Suddenly, a $16,000 Bitcoin price before the end of October doesn’t seem so far fetched after all, and the weekly RSI is even more neutral. 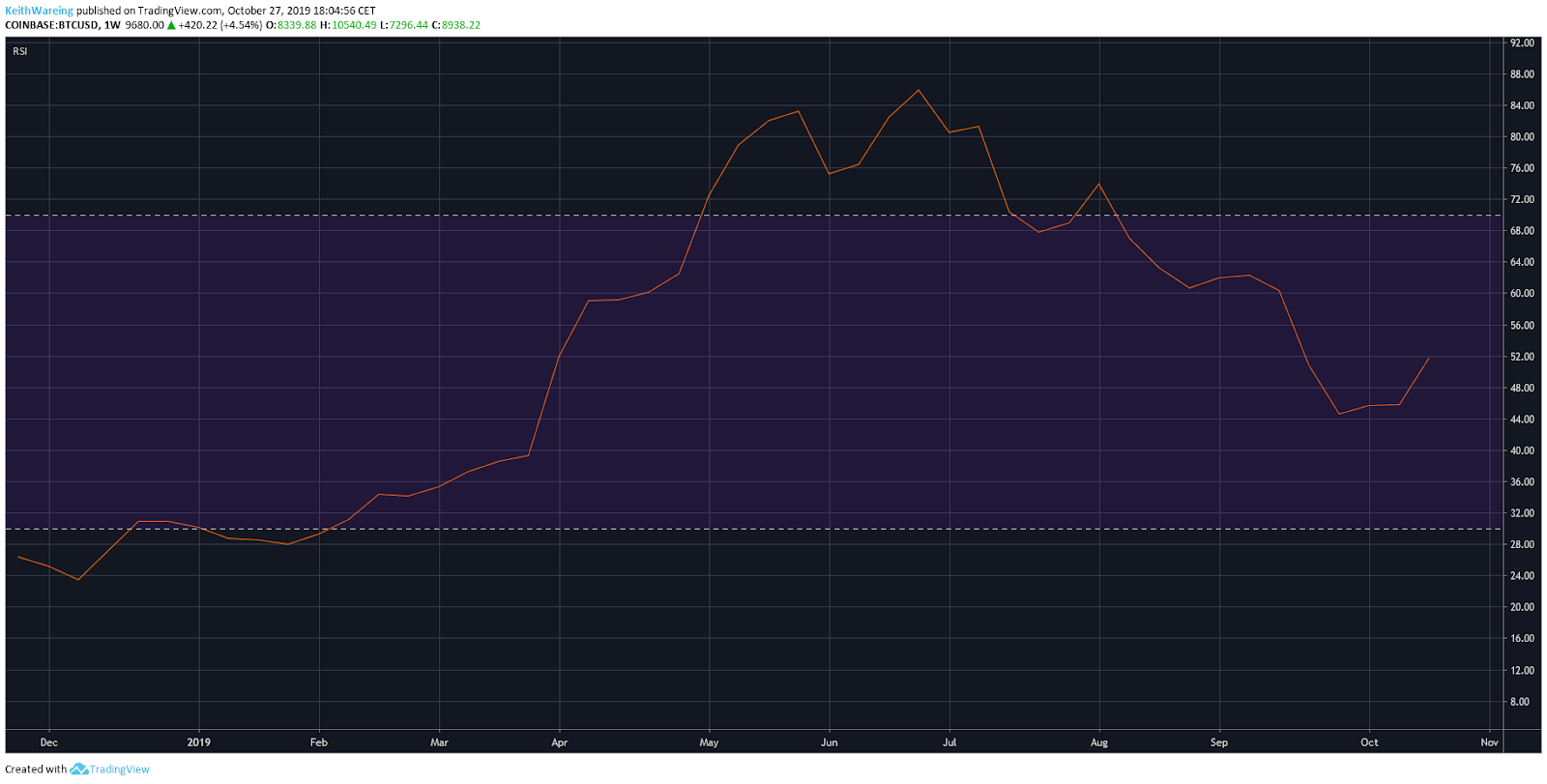 As can be seen on the RSI for the weekly timeframe, Bitcoin is again planted in the middle range. This is expected to change on the candle close at midnight, but with a reading of just 51 coupled with the current upward trajectory, things look good for the digital asset in the week ahead.

As far as the charts are concerned, Bitcoin price is still stuck in the lower range of the Bollinger Bands. This means the price could still fall to $7,700, encountering support around $8,200 along the way. If the price breaks $7,700 the last level of support before a freefall to $6,000 is around $7,400.

Logically speaking, Bitcoin should be experiencing selling pressure from traders taking profits from last week’s big move, but Bitcoin is known for providing surprises. It is difficult to suggest that we are at the beginning of a bull market, but it’s certainly not looking good for the bears in the short term.

It almost seems incomprehensible that Bitcoin price could continue to increase next week but the last few days of price action have shown that this is a possibility. Next week Bitcoin price will need to break and maintain prices above $9,880 to form a new support and gear up for the next move to $12,000 or higher.

If the price slides below $9,150 then it looks like Bitcoin may have to hand the torch back over to the bears. As for the Bitcoin meme prophecy, $16,000 certainly is not on the charts, and as anon pointed out, the charts don’t lie.