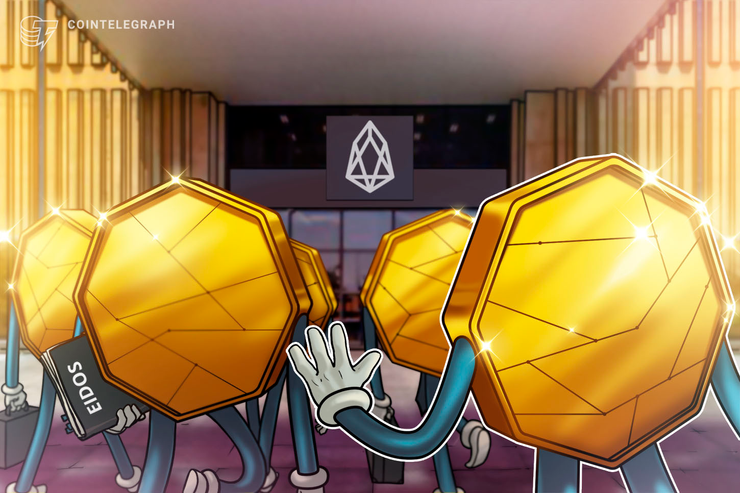 The EOS blockchain is congested by the EIDOS token airdrop, cryptocurrency exchange Coinbase reports on Nov. 9.

In a post on its blog, Coinbase claims that it had trouble in processing its clients’ transactions due to EOS network congestion caused by the EIDOS token airdrop. The exchange has since solved the issue by increasing the amount of staked CPU, securing a sufficient portion of the CPU time remaining on the network to process its transactions.

Interestingly, the incident also caused the price of CPU time on the network to increase by over 100,000% over the course of 4 hours. The CPU time price reached nearly 7.69 EOS/millisecond.

The cause of the EOS congestion

According to Coinbase, a token called EIDOS was released on EOS on Oct. 31 and its airdrop involves sending transactions on the network from the token’s smart contract.

Exchanges have listed EIDOS/USDT pairs on Nov. 1 to allow people that received the tokens to sell them for the stablecoin.

The activity related to the token is responsible for a remarkable portion of total activity on the network:

“Currently, we’re observing around 95% of all EOS transfer actions are related to the EIDOS contract.”

Average users, who hold a relatively low amount of staked CPU resources, are currently unable to send transactions. That being said, the exchange also notes that this situation is only temporary. Coinbase expects the network to return to its normal state as soon as it is no longer profitable to collect the tokens or the CPU leases expire after 30 days and the lenders do not renew the lease. Coinbase also points out:

“It is important to note that the EOS protocol is behaving as expected, but congestion mode prevents users from having transactions processed that exceed their CPU stake.”

As Cointelegraph reported at the end of October, EOS holds the top spot in China’s state-backed crypto rankings, while Bitcoin (BTC) is ranked 11th.

Good news for Bitcoin: New CPI data suggests inflation has peaked | Find out now on Market Talks with Tim Warren and Caleb Franzen
Is the economy in a recession? ‘What you call it is less relevant,’ says one economist: Here’s ‘what really matters’
Coming sooner: ETH devs move up the date for Merge
Jim Beam maker says some customers trading down, others still paying more for high-end liquor
Stocks making the biggest moves after hours: Rivian, Toast, Poshmark and more