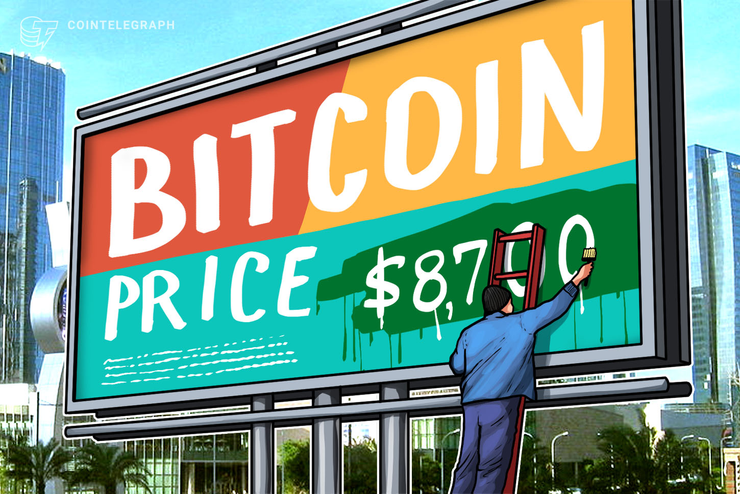 Data from Coin360 shows BTC/USD reembracing the $8,000 zone after spending much of Sunday evening higher, reaching around $9,100.

At press time, the pair had just said a new three-day low of $8,695, subsequently bouncing slightly higher towards $8,800. Bitcoin has languished around that price since Nov. 8, having previously fallen from a range between $9,000 and $9,500.

Despite the drop, however, analysts appeared neither surprised nor bearish about the overall trend.

In a Twitter update on Monday, the popular account known as Crypto Bull highlighted the fact that a dip to current levels represented previous resistance now acting as support.

Others, such as regular Cointelegraph contributor Michaël van de Poppe, had previously said a breakout from range-bound trading between $9,000 and $9,500 was long overdue.

As Cointelegraph reported, attention should now focus on the Moving Average Divergence Convergence, or MACD indicator, which could potentially point the way to a bullish move in the coming several weeks.

Others stayed similarly static, with the except of XRP, which lost 1.6%, and Bitcoin SV (BSV), 3% lower.

Court to hear oral arguments in Grayscale’s lawsuit against the SEC in March
Ethereum vs. Bitcoin: ETH price risks 20% drop if key support level breaks
Bed Bath & Beyond warns it can’t pay down debts, defaults on credit line
Luxury retailer LVMH is optimistic as it sees Chinese shoppers and tourists returning
Elon Musk’s Tesla held onto its Bitcoin in Q4 despite market turbulence