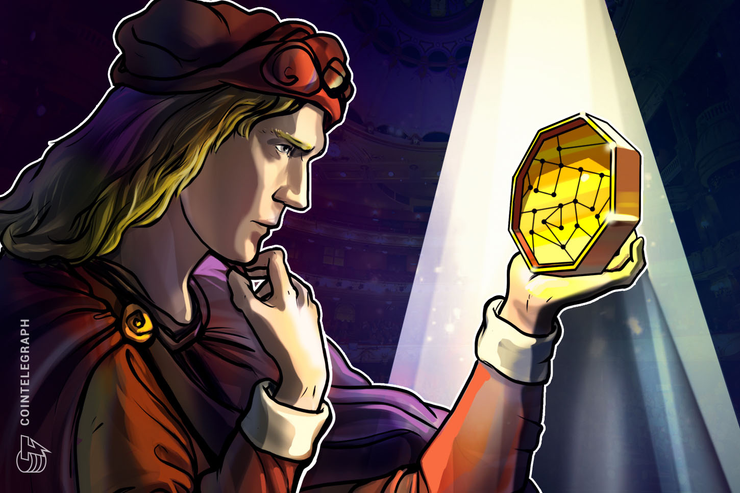 While the majority of crypto traders are discussing a variety of bullish and bearish perspectives on Bitcoin (BTC), many altcoins are jumping around and making significant moves. One of them is VeChain (VET), which has surged more than 100% in a matter of weeks.

For the first time since listing, VeChain managed to break the 200-day exponential moving average (EMA), as can be seen in the following chart. 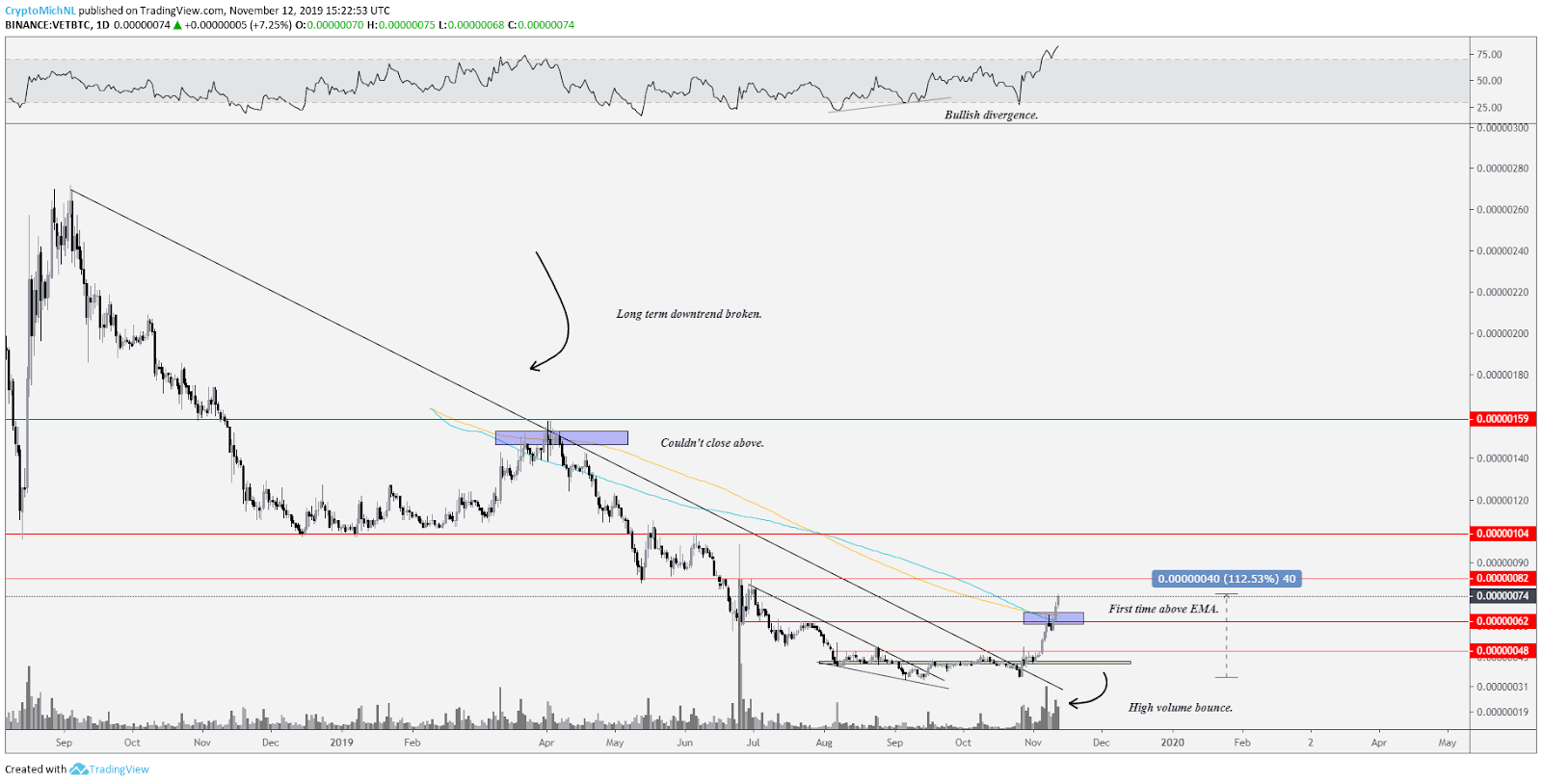 Some other notably entertaining keynotes can be found on VeChain’s daily chart. It’s not only moving above the 200-DMA and EMA, but it also broke a 14-month long downtrend. Similar to the breakout of the downtrend, a falling wedge pattern with bullish divergences marked the bottom during August and September of 2019.

Remarkably, bullish divergences and falling wedge patterns are one of the most reliable bottom indicators when trading, and once again, they managed to be strict in the call. Given that this occurred in the daily timeframe, it often takes a while before the divergences become ‘active.’

After confirmation, a slightly higher low was constructed before the breakout of the longterm downtrend. Notably, one can be seen that there was a massive increase in volume after the break of the downtrend, which is a strong signal. 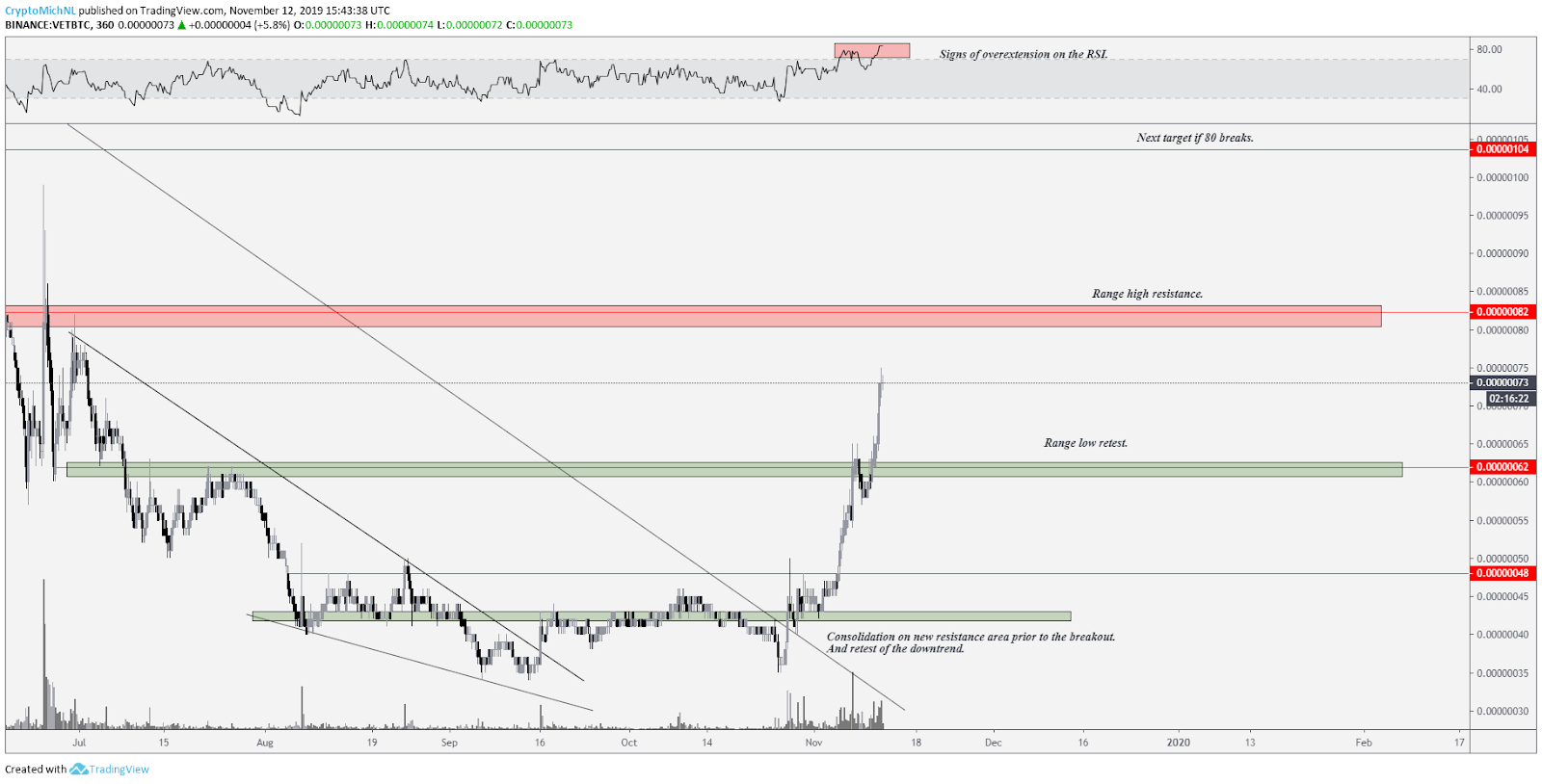 Meanwhile, the relative strength index (RSI) is showing its highest level since listing on several timeframes. This could indicate that some period of cool-off is ready to occur for the altcoin.

Similar price action is playing out across the altcoin market

Other altcoins across the field show similarities in the strengths of their price action. For example, is ZRX (0x), was one of the first altcoins to break out of a longterm downtrend. 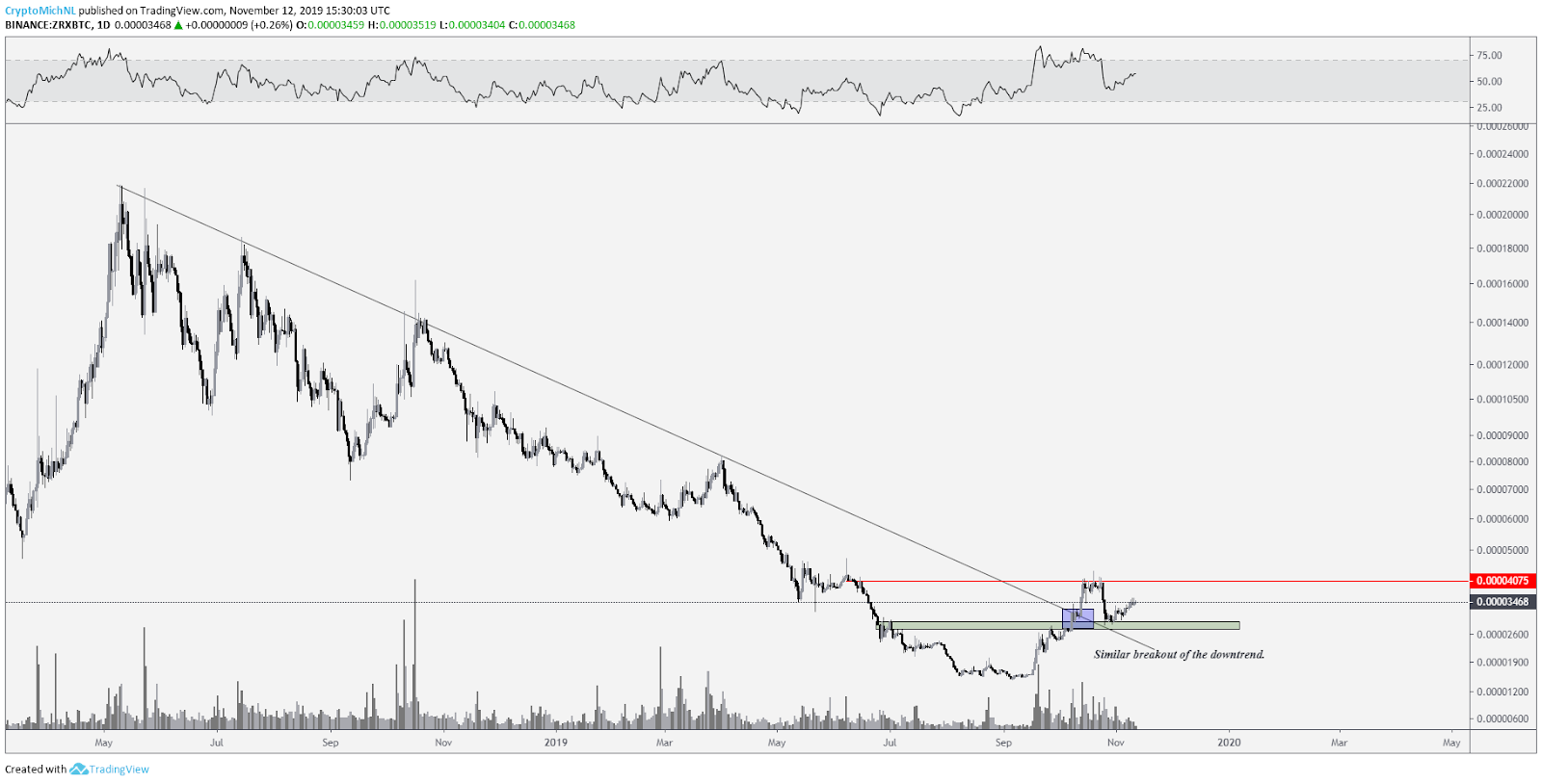 As can be seen in the chart, a breakout occurred with high volume after a similar falling wedge with bullish divergence was constructed. Alongside the breakout, ZRX moved towards June 2019 levels, which led to a 170% increase since the bottom.

Furthermore, other altcoins are also beginning to take steps towards their longterm downtrend lines and some are currently trying to break out of it. Another good example is Ontology (ONT), which is now moving out of an 18-month long downtrend. 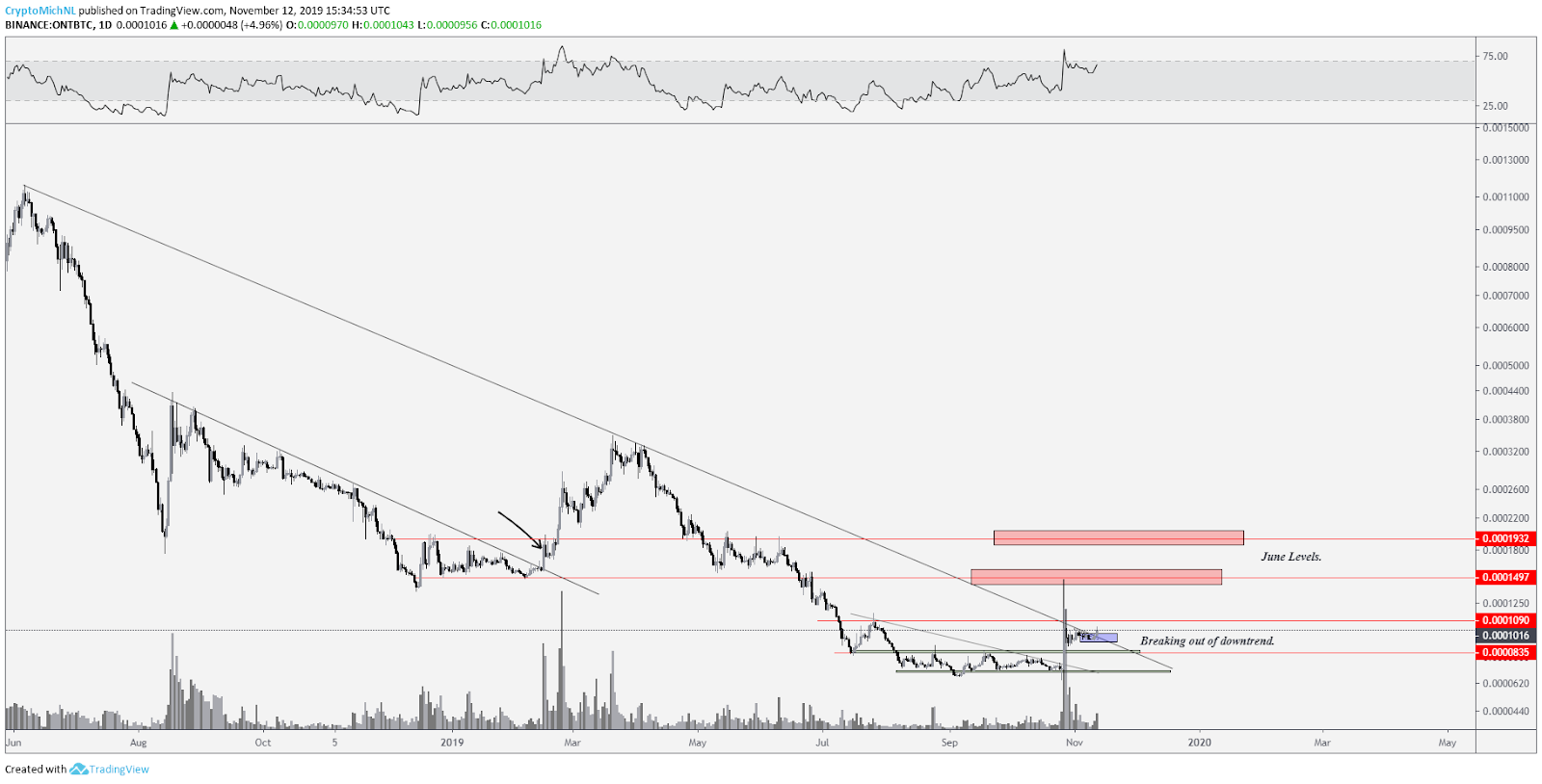 Ontology broke out of a 5-month downtrend earlier in November. This push shifted the price towards the primary downtrend (18-months old) which has currently broken upward. If it is going to show price action similar to ZRX and move back towards the June 2019 price levels, a continued move towards 0.0001500 – 0.0001900 (sats) is not off of the books.

VeChain against USDT ready for a retracement? 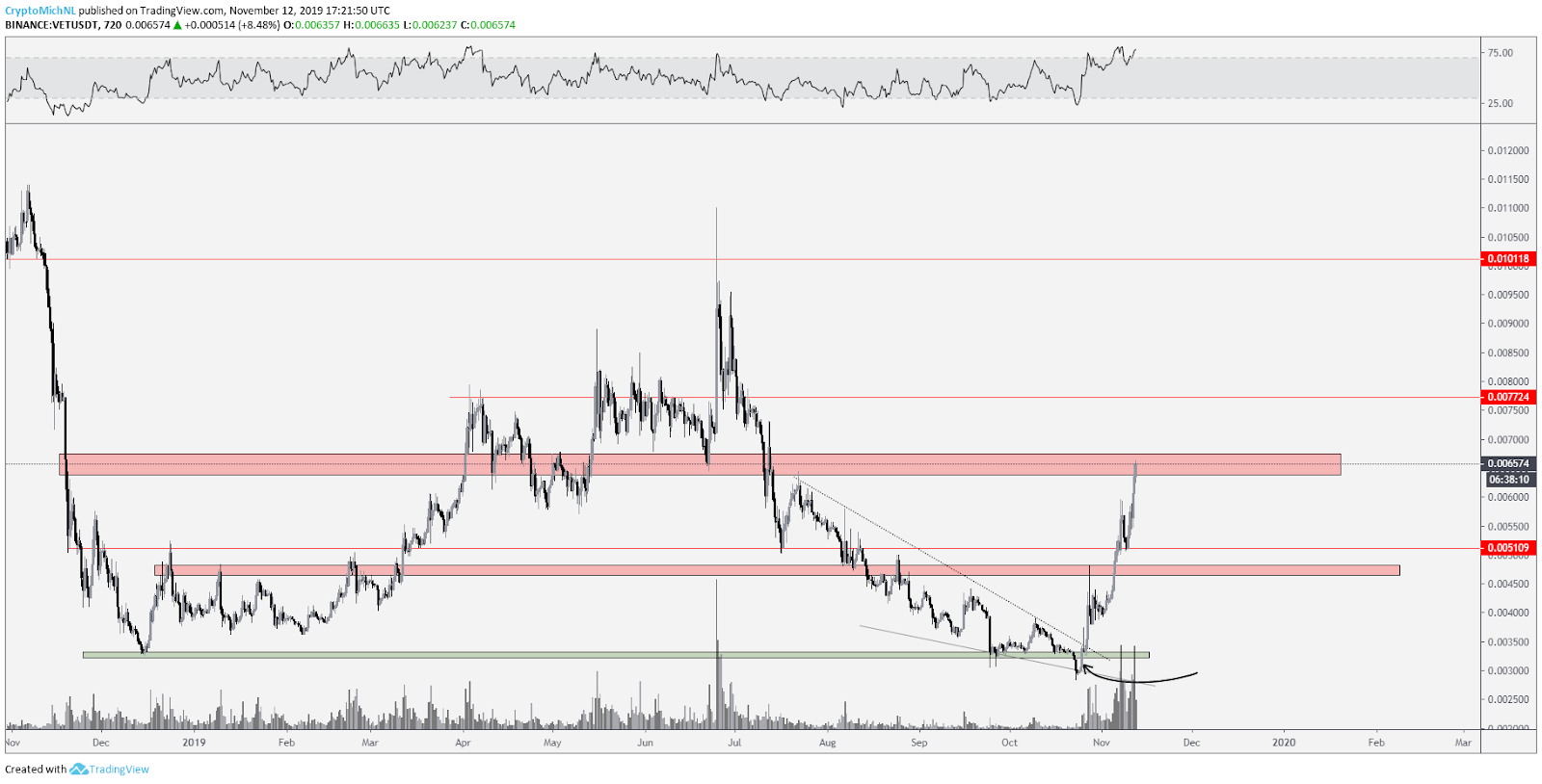 The USDT chart is showing some of the same signals as the Bitcoin chart. A heavy move upwards from the local bottom at $0.003 (which was also a falling wedge structure), slight consolidation, and eventual retracement of the range high of $0.006. This retracement leads to a strong bounce of the $0.0051 level which was previously a resistance that flipped support a few days ago.

The price of VET in USDT is currently hovering around resistance with the RSI in overbought areas. The price needs to continue to produce green candles to prevent it from creating bearish divergences, a usual top signal.

Given the movements of VeChain, a bullish scenario is more likely to occur than a bearish scenario, and there are several scenarios in place for the asset.

The first scenario would be a straight copy of the movements before the break of 0.00000060 to 0.00000062 (sats) a few days ago. In that scenario, the price will continue moving towards the range high, consolidate a little bit and continue its way towards the next level at 0.00000100 (sats). 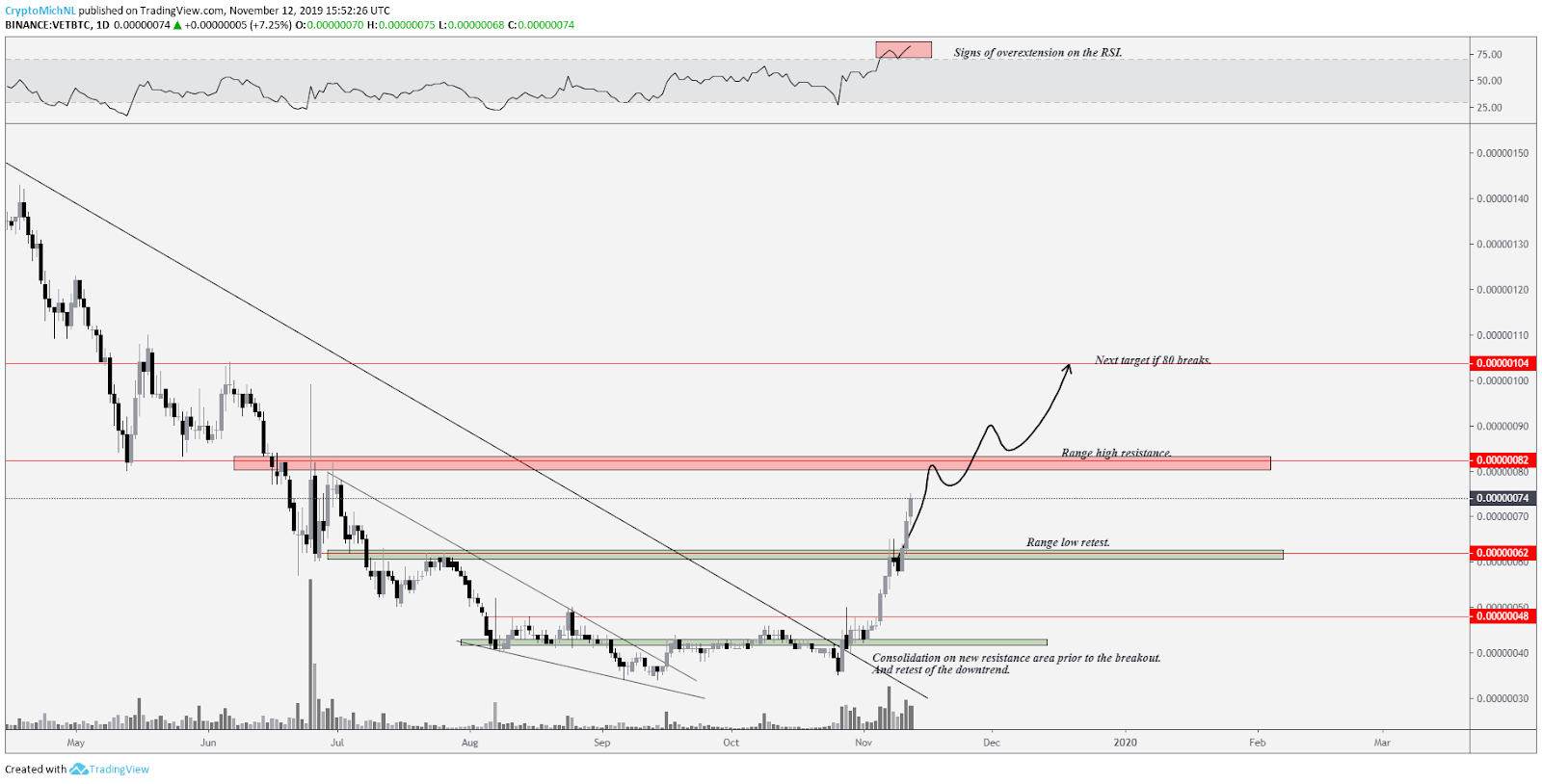 The second scenario first requires a drop first, which is a short term bearish outlook. 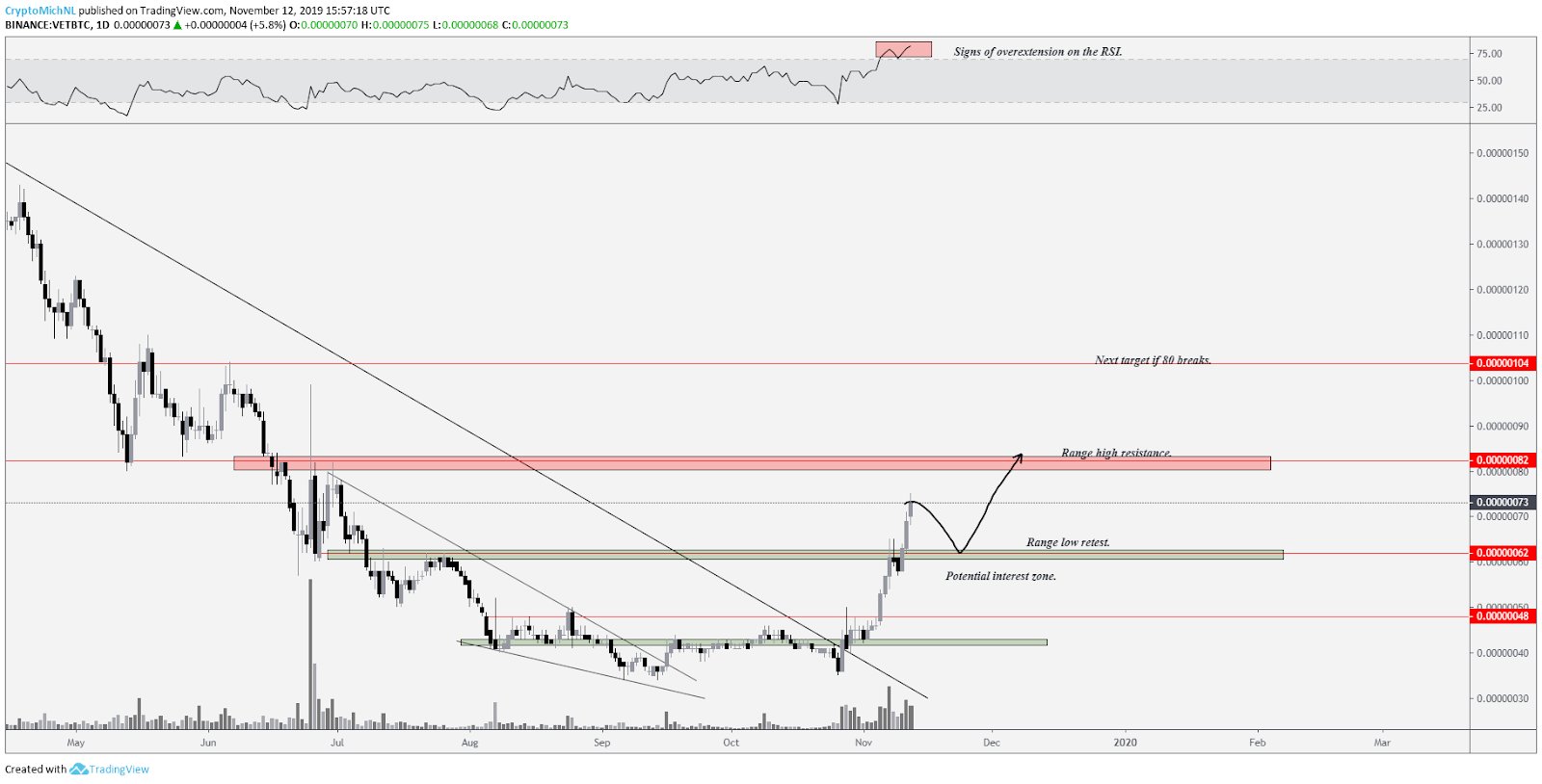 A bearish view could occur if the VET/USDT pair is unable to continue showing strength, which would confirm the bearish divergences on higher timeframes. In that regard, traders might look for a retest of the 0.00000060 (sats) zone and a possible drop below that area. 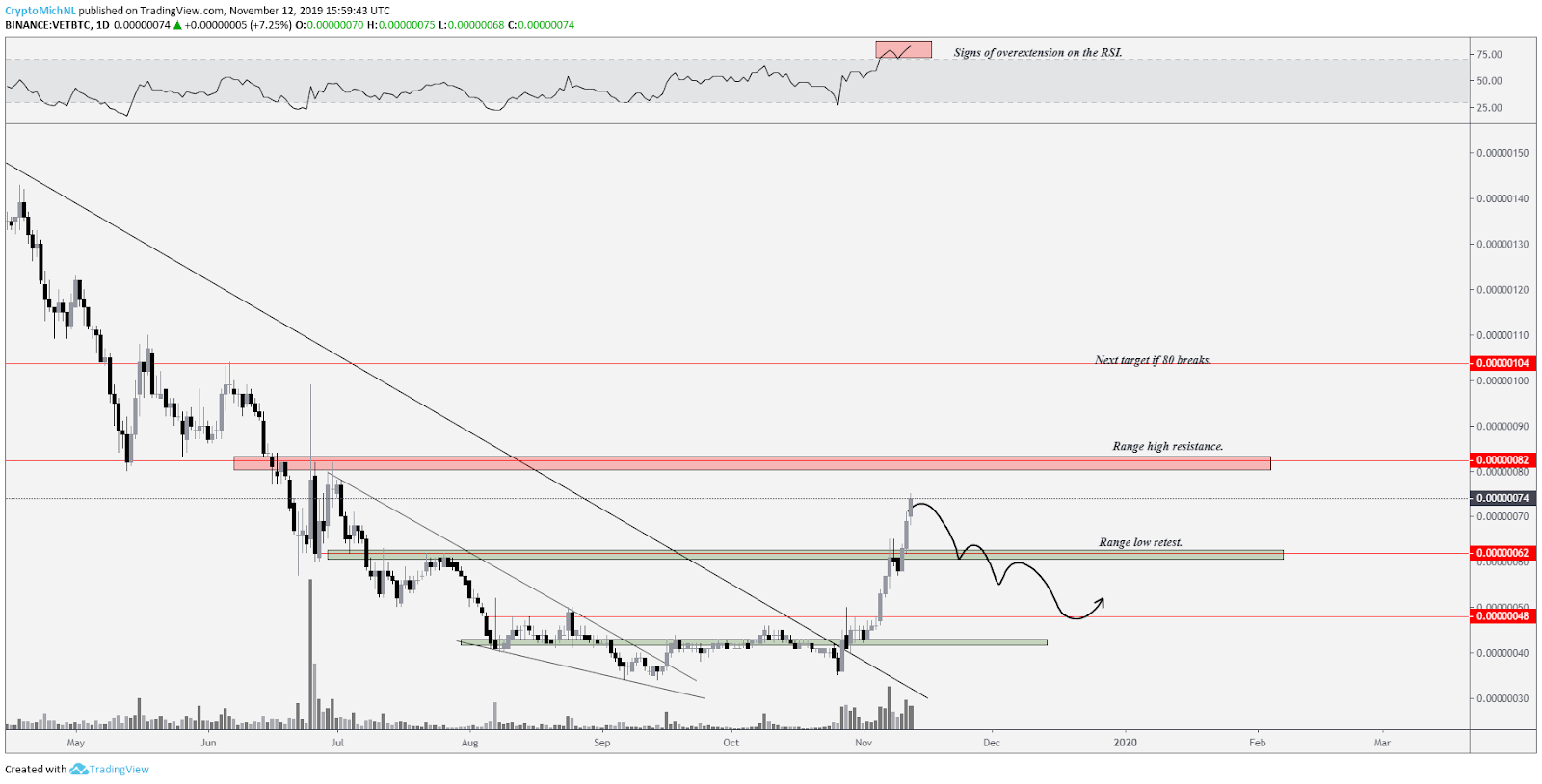 Given the strength of the altcoin and the volume behind the move, it’s less likely to occur. However, if VeChain retraces back to the range low and doesn’t find enough strength to bounce with volume, a possible retracement towards 0.00000050 (sats) is a real possibility.

There are several reasons for a possible retracement, one could be Bitcoin making volatile movements which would cause the market to become chaotic all over again.

At this point, powerful movements and more likely to continue to the range highs.

‘Crypto summer’ likely to start in Q2 2023, Morgan Creek Capital CEO says
As some retirees worry about surprises this tax season, these resources may help
Price analysis 2/1: BTC, ETH, BNB, XRP, ADA, DOGE, MATIC, DOT, LTC, AVAX
Hong Kong will give away half a million plane tickets. Here’s who can get them first
Luxury developers in Los Angeles bet someone will pay record prices for these condos