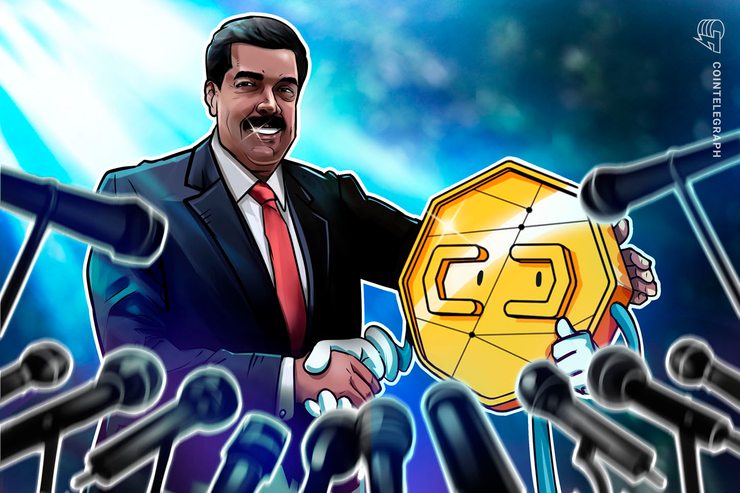 Last week, the president of Venezuela, Nicolás Maduro, appeared on national television approaching a Trezor-branded stall at a local technological fair. He seemed perplexed as to what exactly a hardware cryptocurrency wallet is supposed to do.

Still, Maduro, device in hand, turned to the camera and proclaimed that cryptocurrencies — his country’s own digital currency, Petro, in particular — are important for Venezuela’s economic future. Trezor officials soon clarified that they had nothing to do with the stunt, and that the company had no official resellers in the country.

The event seemed to accurately portray the precarious situation of cryptocurrencies in Venezuela. They are widely popular, given the hyperinflation and overall failing state of the local economy, but are mostly traded underground via peer-to-peer services.

Meanwhile, Maduro’s government is mostly focused on Petro — the controversial, state-controlled cryptocurrency tasked with saving the Venezuelan economy. So, what has Maduro’s apparent obsession with cryptocurrencies resulted in so far besides an underdeveloped pet project?

Maduro was not pro-crypto before announcing Petro

The new president continued the policial course of his predecessor, who largely relied on oil-fueled welfare policies to maintain economic stability. However, the price of oil — which reportedly account for 99% of Venezuela’s export earnings — started to tumble under Maduro’s administration, bringing the country to the verge of a major humanitarian catastrophe.

Thus, the inflation rate has been on the rise ever since Maduro was elected president. In 2018, it was at 1,698,488%. According to the International Monetary Fund, Venezuela’s hyperinflation rate increased to as much as 10,000,000% at some point this year.

Needless to say, these numbers have real implications: In 2017, 87% of people in Venezuela were living in poverty, rising from 82% in 2016 and 48% in 2014, according to an academic study. Hunger is also a major problem, with Venezuelans losing about 24 lbs on average in 2017 due to nationwide food shortages.

The president has blamed capitalism for the ongoing problems. For instance, Maduro argued that an imperialist “electromagnetic attack” caused the largest power outage in the country’s history, which occurred in March 2019. According to opposition leader Juan Guaidó, it was actually “the product of the inefficiency, the incapability, the corruption of a regime that doesn’t care about the lives of Venezuelans.”

Related: Venezuelan Petro Against US Sanctions: History and Use of the Crypto

In December 2017, Maduro took to national TV to present a potential fix for the many economic difficulties — a state-run digital currency called Petro. The cryptocurrency would be backed by the country’s oil, gold and mineral reserves, the president said.

Ironically, Maduro’s administration had been anti-crypto up until that point. Earlier in 2017, reports emerged that the government had begun cracking down on mining operations. Indeed, cryptocurrency mining was and still remains a popular activity in Venezuela, as it allows locals to capitalize on cheap electricity prices.

“In Venezuela, the most popular currency is Bitcoin,” according to Venezuela-based cryptocurrency consultant and Cointelegraph en Español contributor Jhonnatan Morales, who added that, “Many people are mining and trading Bitcoin not to acquire products, but to protect themselves from hyperinflation.”

Maduro’s Petro was designed to dodge United States sanctions that supposedly hinder the local economy. As the Venezuelian leader himself put it, the cryptocurrency aims to fight the financial “blockade” erected by the U.S. President Donald Trump’s administration. In response, Trump restricted American investors from participating in the initial coin offering for Petro, which launched on Feb. 20, 2018. Morales told Cointelegraph:

In March 2018, a month into the ICO, Maduro claimed that a total of $5 billion was raised during Petro’s presale — which would make it one of the largest ICOs to date, eclipsing the $2 billion TON token private offering led by Telegram and the $4.2 billion token sale of EOS.

However, as Steve Hanke, an applied economist at Johns Hopkins University, has pointed out, those claims “aren’t believable” because they have yet to be verified by an independent audit.

Petro was officially launched in November 2018, following a series of delays. The release was not problem-free, either. Soon after the white paper was published, crypto enthusiasts found out that Petro largely plagiarized its documentation from Dash (DASH), one of the most popular cryptocurrencies in the country.

As Jorge Farias, CEO of Cryptobuyer — a Panama-headquartered exchange platform run by a team of Venezuleans — told Cointelegraph, Petro is technically a Dash fork, albeit a permissioned one:

“Petro has gone through different stages, from a totally failed one, to one where there is a blockchain that although it is private and not auditable at least it has a block explorer. It is an X11 fork that is the same one used by DASH.”

Maduro seems determined to integrate Petro into the local economy, even though its utility seems questionable. For instance, he has announced the launch of a Petro-funded crypto bank to support youth and student initiatives, and Venezuelan Minister of Habitat and Housing Ildemaro Villarroel declared that Petro will be used to fund the construction of houses for the homeless. Maduro has also publicly called on workers to save in gold and Petro during a salary shake-up.

In December 2018, the government went as far as to automatically convert pensioners’ monthly bonus into Petro, despite the fact that the cryptocurrency was not widely accepted in the country, according to reports. Around the same time, Maduro claimed that his government will use Petro to sell oil and hence minimize U.S. dominance on the global market.

Country-wide adoption could be nearing for Petro at last, although under compulsion. In August this year, Maduro ordered the country’s leading bank, Banco de Venezuela, to accept the nation’s cryptocurrency at all of its branches. In September, when the bank provided its clients with online wallets catering to Petro, the people of Venezuela set a new record for trading cryptocurrencies — only they weren’t trading Petro.

From Sept. 1 to Sept. 7, Venezuelans traded more than 120 billion bolivars (about $12 billion) for Bitcoin on P2P exchange LocalBitcoins, showing that demand for decentralized cryptocurrencies has not diminished with the state-run asset’s arrival. A representative for the charity-focused organization Bitcoin Venezuela told Cointelegraph that indeed, most cryptocurrency trading is done via P2P services:

“Bitcoin is popular as it used to be used as a way to send remittances from outside the country through LocalBitcoins, Hodl Hodl, Paxful, because it is very liquid and there are thousands of people willing to buy your BTC right away for Bolivars (VES) in a bank account, the local currency, or Dollars in a US bank or USD cash.”

The spokesperson also confirmed that there are no large exchanges based in the country, only a “BTC/VES brokerage service” and seven exchanges that have been approved by officials to operate in the country.

These platforms seem to be mostly focused on Petro, as they have BTC/PTR and PTR/VES trading pairs listed on their websites. Cointelegraph reached out to most of the approved exchanges — Cryptolago, Coincave, Bancar, Ambers Coin and Cryptia — but none have replied.

Nevertheless, Petro might still become widely accepted in Venezuela at some point in the future. According to Farias of Cryptobuyer, “They talk about more than 900 businesses already accepting it as a form of payment and the obligation to keep double accounting for private and public companies.” This may suggest that the bolivar may soon be eliminated and thus set a precedent for the rest of the world. Farias added:

“Many businessmen and companies have shown some interest as long as it can be converted into some other crypto or FIAT, but it is necessary to wait for the mechanisms and regulations that will govern these processes to draw some conclusion.”

Maduro remains pro-Petro, anti-crypto — although not in an obvious way

It seems that Maduro has appropriated cryptocurrencies for his own means — and Petro allows the Venezuelian leader to weed decentralized cryptocurrencies out from that agenda. Indeed, the state needs a currency that it can control. Morales told Cointelegraph:

“Almost 30% of all retail operations in Venezuela are made through the dollar. This does not allow the Venezuelan government to collect taxes since they have no way to access the account in dollars where Venezuelans deposit their taxes.”

According to Javier Bastardo, a local cryptocurrency enthusiast and Cointelegraph en Español journalist, Maduro’s knowledge of the technology behind cryptocurrencies seems limited, although that doesn’t stop him from aggressively promoting Petro:

“He talks about the ‘technological revolution,’ ‘new relations,’ but this is just rhetoric. Obviously he only shills his own project and tends to not mention Bitcoin.”

In August, Trump’s administration froze all Venezuelan government assets, further escalating the tense U.S.–Venezuelan relations and prompting Maduro to work on alternative financial options like Petro. Perhaps that — along with other developments like the study suggesting that Venezuela is now more than 50% dollarized — was what caused Maduro to attend the technological fair last week.

As Farias explained to Cointelegraph, the fair was a private event launched by Banco de Venezuela, where various companies showcased solutions “based in one way or another on cryptocurrencies.”

Trezor or not Trezor?

One of the attending firms was Trezorvenezuela, a local company that is not directly affiliated with Trezor but sells its products locally. Maduro approached the company’s stall on live television, which resulted in the president of Venezuela de facto endorsing a cryptocurrency wallet developed by a nonlocal company without its consent.

“Trezor and Satoshilabs do not have any official representatives in Venezuela, nor do we have any active authorized resellers in this region,” the official statement that soon followed from the hardware wallet firm read. It continued:

“We’re in no way associated with those people claiming to be official representatives of Trezor, and do not endorse or permit their use of our brand. We are carefully investigating this copyright infringement.”

The statement then added that the individuals were at one time Trezor resellers from the third quarter of 2018 but were removed from the list in June 2019 due to inactivity. In an additional comment to Cointelegraph, the Trezor representative added that they are “in contact with Trezorvenezuela and are continuing our investigations to decide what steps to take next.”

A spokesperson for Trezorvenezuela, in turn, explained to Cointelegraph that they “saw nothing wrong with participating,” elaborating:

“Our company was at the event, as in the others, as it supports the cryptocurrency ecosystem in general, without politicizing them, our vision and commitment is with the ecosystem and demonstrate that cryptocurrencies are real solutions to multiple problems. Even for the people of Venezuela, which gives them freedom to manage their funds and protect themselves from the hyperinflation that our country is home to.”

The Trezorvenezuela representative added that Maduro’s team did not contact them after the fair.