Bitcoin (BTC) finally dropped all the way down to the $7.4Ks in minutes as anticipated in our previous analysis if the key $7.8K level did not hold.

Over the past week, BTC/USD has faced a slow grind down to the $8,000 price level. Now, Bitcoin also broke below its 0.786 Fibonacci retracement level as well — its last major level before a confirmed full retrace of the Oct. 25 rally to $10,500.

After a short bounce, Bitcoin has bounced back to around $7,600 at press time.

As Cointelegraph reported, rumors of Chinese authorities raiding Binance’s Shanghai offices were likely also responsible for the drop. However, the exchange said that they had not received a notice from Chinese authorities, which required Binance to detail its activities.

“Binance has no fixed offices in Shanghai or China, so it makes no sense that police raided on any offices and shut them down. […] There has been a recent spike in the number of negative articles and activities against Binance in China. We wouldn’t delve too much into what causes this, because we prefer to continue BUIDLing our solutions.”

Nevertheless, after several days of choppy price action, BTC/USD finally posted a decisive drop below $8,000 falling under its 0.786 Fibonacci retracement level at $7,870 and plummeting all the way down to $7,390.

This was the level of consolidation prior to the historic 42% price rise on Oct. 25. 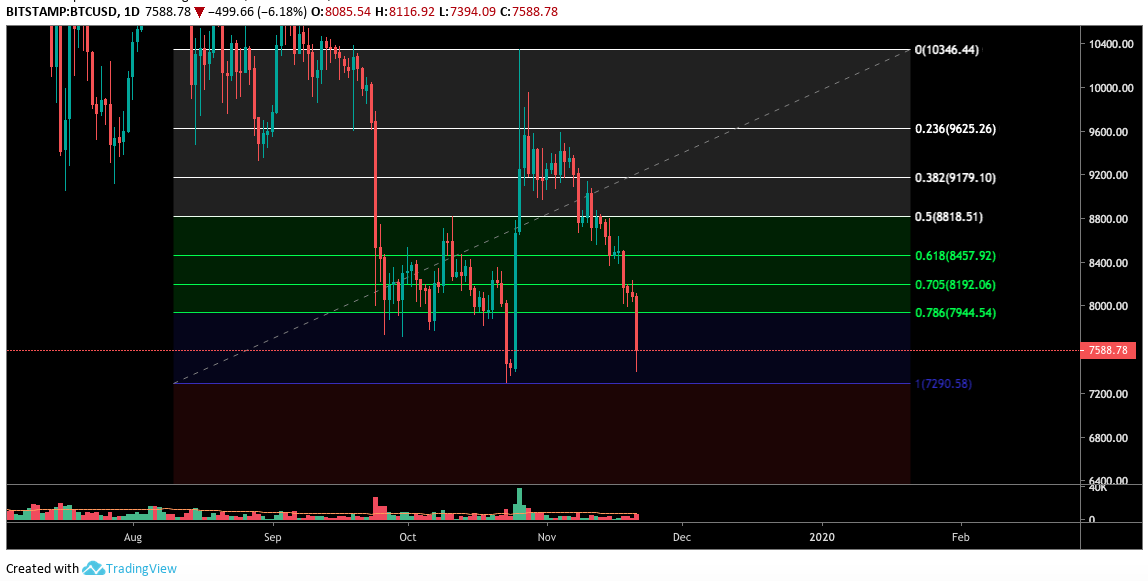 If Bitcoin falls further below $7,307, it may indicate its bullish swing up to $10,500 on Oct. 25 was a fluke, resulting in net sideways action for the past month. Furthermore, a bearish outlook might even see BTC’s recent $10,500 upswing as a significant bullish correction albeit in a continuation of a general downward trend.

On a bullish note, however, Bitcoin did not yet breach the previous low and bounced with a fair bit of strength from $7,390 up to $7,640.

If Bitcoin continues to tumble, however, $7,230 may provide a bit of support. Although beyond that, not much buying strength exists before the $6K range.

If $6,000 breaks as easily as it did to the upside in May, however, significant support exists between $5,800 and $5,000 as the market spent considerable time in this region earlier in 2019.

Tezos (XTZ), on the other hand, was the only standout today gaining on news that the French army is using the Tezos blockchain. But the rally didn’t last long. The staking-based digital asset saw a high of $1.30 before dropping down to $1.19 at press time.