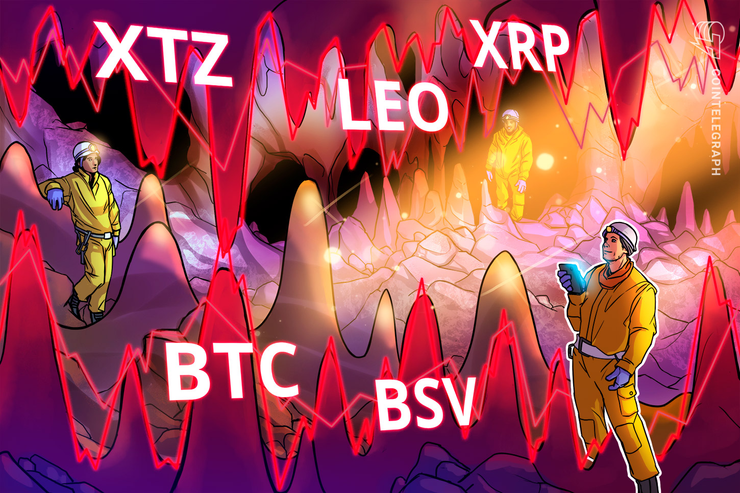 The total crypto market capitalization slumped from close to $238 billion on Nov. 18 to a low of about $189 billion on Nov. 22. That is a drop of just over 20% within four days. However, despite the sharp fall in prices, the Bitcoin miners remain unfazed as the hash rate on Nov. 23 was close to its previous all-time highs.

Cardano (ADA) creator Charles Hoskinson tweeted that the current price drop was due to the FUD created by the media news and market manipulation. He reminded the crypto community that crypto is unstoppable and is the future as it will change the world. He expects Bitcoin’s price to rise above $10,000 and eventually reach $100K.

Bakkt futures volumes skyrocketed on Nov. 22 and hit a new all-time high of 2728 futures contracts, which was about 30% higher than the previous high hit on Nov. 8. Along with the volumes, the open interest also increased 29% over the previous day.

On Nov. 22, Bitcoin prices recovered from their lows, which shows buying by the institutional players at lower levels. Our assumption of accumulation by the large players will be invalidated if the prices continue to drop and the open interest increases. That will indicate shorting.

The next few days will give us a better picture of whether this is the start of another bear phase or if this a great time to invest. Let’s look at the critical levels to watch out for, both on the upside and the downside.

Bitcoin (BTC) prices took a beating on the news that Chinese authorities had raided and shut down the Shanghai offices of leading cryptocurrency exchange Binance. Though Binance rebutted the media reports, the damage had already been done.

Analysts at a Bloomberg panel discussion said that BTC becomes more appealing during times of global uncertainty. They also agreed that BTC would eventually become a store of value and act as digital gold. Has the current fall dented the technical picture beyond repair or is this the last opportunity to buy BTC at these low levels? Let’s find out.

The BTC/USD pair is trading inside a falling wedge pattern. The bulls are attempting to defend the support line, which is just below the 50-week SMA and 61.8% Fibonacci retracement of the rally from $3,236.09 to $13,973.50. As there are several supports close to the current levels, we expect a bounce off it.

Contrary to our assumption, if the bears sink and sustain the price below the support line of the wedge, a fall to 78.60% Fibonacci retracement level of $5,533.90 is likely. Instead of panicking, investors should start building positions if the price sustains above $7,702.87.

Tezos (XTZ) is the only major cryptocurrency that has rallied in the past seven days and is in the green. There were a couple of announcements that could have supported the price. Coinbase custody has said that it will expand its staking service to all investors across the globe, which is an added incentive to the HODLers to hang on to their investment.

Tezos Southeast Asia has tied up with the Singapore government-backed blockchain platform Tribe, to launch a training program for developers from the first quarter of 2020.

While there are some developments on the fundamental side, will it be enough to sustain the rally when the whole crypto space is in a bear grip? Let’s analyze its chart.

After a mild correction last week, the XTZ/USD pair has resumed its up move. It can now move up to the overhead resistance at $1.85. The price had turned down from $1.85 on two previous occasions. Hence, this level will again act as a major hurdle. If the price reverses from $1.85, it will extend its stay inside the range for a few more days.

However, if the bulls can push the price above $1.85, the pair will start a new uptrend that can carry the price to $2.87 and above it to $3.37. Conversely, if the negative sentiment in the crypto markets compels traders to book profits at the current levels, a drop to the 20-week EMA and below it to $0.829651 is likely.

A break below $0.82961 will be a negative sign as it will result in a fall to the yearly lows.

UNUS SED LEO (LEO) was the second-best performer of the past seven days even after declining close to 4% during the period. This shows the kind of selling other major cryptocurrencies have witnessed. Can LEO continue to outperform or will it also succumb to selling pressure? Let’s look at the chart.

The LEO/USD pair has made a new lifetime low of $0.92827 this week. This is a negative sign as it indicates that buyers are in no urgency to accumulate even at these levels. If the bears can sustain the price below $0.941, the decline can extend to the next support at $0.8276.

Contrary to our assumption, if the price turns around from current levels, it would continue to consolidate for a few more weeks. The first sign of strength will be a breakout above the overhead resistance at $1.0544. Traders can wait for the price to close (UTC time) above $1.0544 before initiating long positions.

XRP fell close to 13% in the past seven days. Cryptocurrency forensics and analysis firm Elliptic has said that after researching XRP for over a year, they have traced about $400 million worth of tokens to illegal transactions.

Tom Robinson, the chief scientist and co-founder of Elliptic, said that the company is “committed to shining a light on this illicit activity, giving financial institutions the confidence they need to engage with the crypto ecosystem.”

Meanwhile, the bears are attempting to sink the XRP/USD pair below the descending triangle. This is the third time the price has broken below the support at $0.24508. During the previous two instances, it had reversed direction from close to $0.22 levels. Hence, this level is likely to act as strong support once again.

If the price again reverses direction at $0.22, the bulls will attempt to carry the altcoin above the downtrend line of the descending triangle. A breakout of the triangle will signal the start of a new uptrend.

However, with the 20-week EMA sloping down and the RSI in the negative zone, the advantage is clearly with the bears. If the price slips below $0.22, the downtrend will resume. The next support on the downside is $0.15 and below that, the pair can plunge to $0.12132.

Bitcoin SV (BSV) corrected about 17% in the past seven days and still turned out to be the fifth-best performer. After the recent fall, does the altcoin offer buying opportunities or can it fall lower? Let’s study its chart.

The BSV/USD pair broke below the descending channel and the critical support at $107 but the buyers emerged at the minor support of $92.693. Currently, the bulls are attempting to push the price back above $107. If successful, the pair can rise to the resistance line of the descending channel.

Conversely, if the price fails to re-enter the channel, the bears will again attempt to sink it below the immediate support of $92.693. If this support cracks, the decline can extend to $78.506.

The views and opinions expressed here are solely those of the author and do not necessarily reflect the views of Cointelegraph. Every investment and trading move involves risk, you should conduct your own research when making a decision.

The market data is provided by the HitBTC exchange.

Bitcoin fails to beat $23.4K sellers as US payrolls upend inflation debate
Boeing Dreamliner deliveries to resume in the ‘coming days,’ FAA says
Coming sooner: ETH devs move up the date for Merge
Bitcoin braces for US inflation data as CPI nerves halt BTC price gains
Hawaii is the ‘perfect place to retire by the beach,’ says millionaire—but there are 3 big downsides