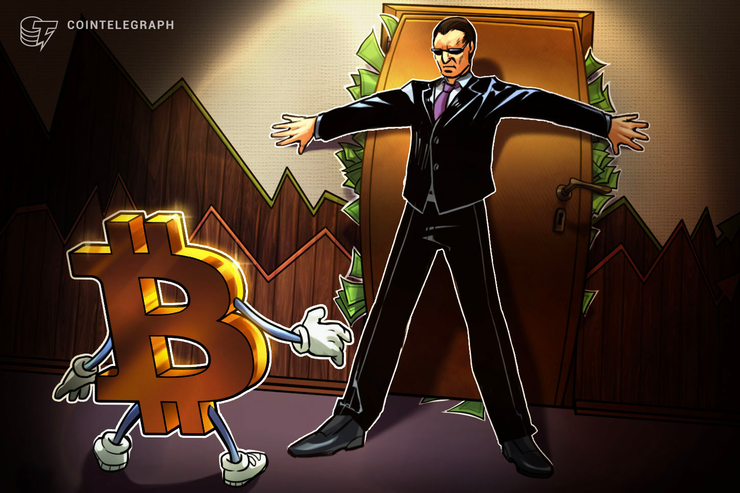 Bitcoin (BTC) price took a seemingly unexpected turn over the last week as the digital asset shed nearly $2,000 over the past 5 days. Last Sunday Bitcoin looked strong with a peak at $8,727 but by Friday the price found a floor at $6,776.

With a drop of 22% within just 5 days, can investors expect a bounce to reclaim the lost ground, or will Bitcoin head to new lows to close out 2019? Let’s take a look at what could happen next. 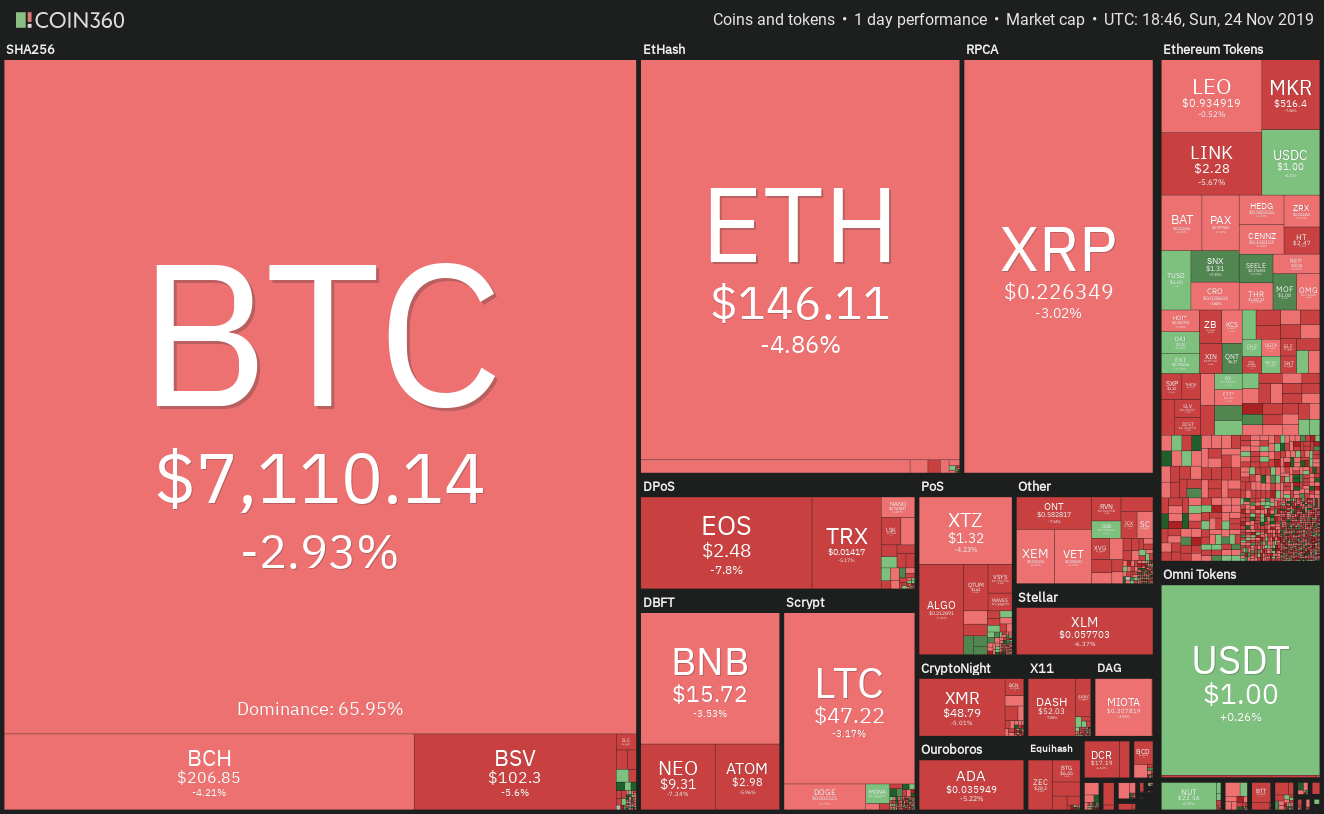 Why did Bitcoin dump?

Currently, there are many theories flying around Twitter. For example, some attribute the drop to the Plus Token scammer identified as a whale that dumped 7,000 BTC on Huobi. Others have suggested that the FUD surrounding China’s recent vow to dispose of crypto exchanges directly impacted crypto prices. It’s hard to gauge whether the current price swings are perfectly normal, or maybe, just maybe it’s some dude selling a lot of Bitcoin to buy something (god forbid).

One thing is certain, and those of us who have been involved in the crypto space for a number of years will understand this point. China-driven FUD is a very real catalyst for negative price action. Whether it’s actual Asian sellers or Western investors panic selling is anyone’s guess, but it is worth noting that from a technical perspective Bitcoin price could be perceived as behaving as expected. 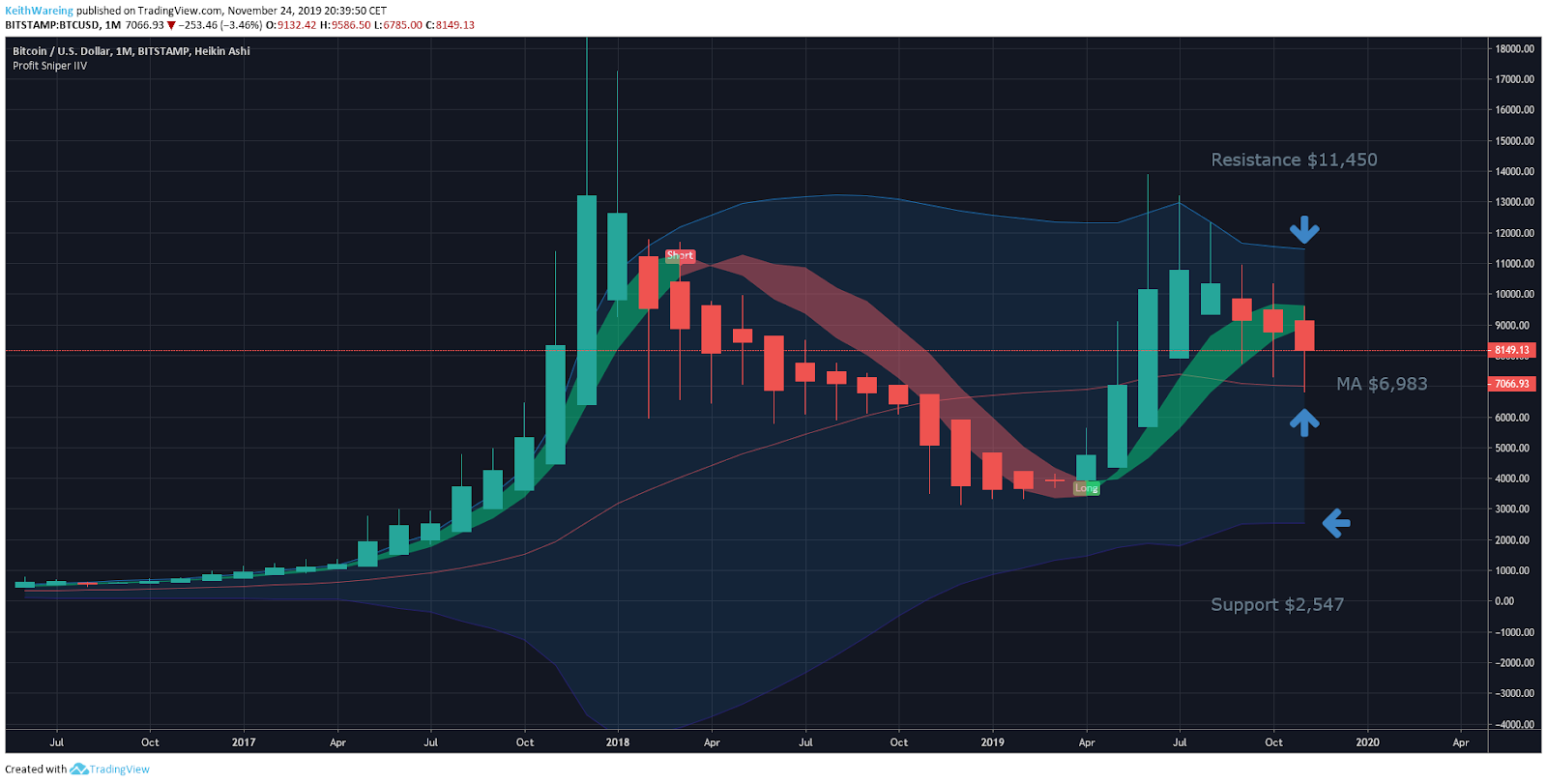 The Bollinger Bands indicator on Bitcoin’s monthly chart tells one of two tales. Using the Bollinger Band moving average as a level of support in the $6,900 region, one can see that despite breaking through ever so slightly, Bitcoin price still bounced up from this level both on Nov. 22 as well as today.

This can be interpreted in one of two ways. The price broke the moving average so the next step is down towards the bottom of the Bollinger Bands, which in this instance is around $2,547. Alternatively, one can infer that the price was rejected at the moving average suggesting Bitcoin price is still ranging between the moving average and the resistance, which is currently at $11,450.

Some readers may interpret this analysis as hopium dealing but one must take a close look at the facts. Just one month ago Bitcoin price jumped from $7,500 to $10,000 in 24 hours out of the blue, and as far as the monthly chart was concerned, nothing was out of the ordinary. A 42% gain was basically just another day in crypto, or is it? 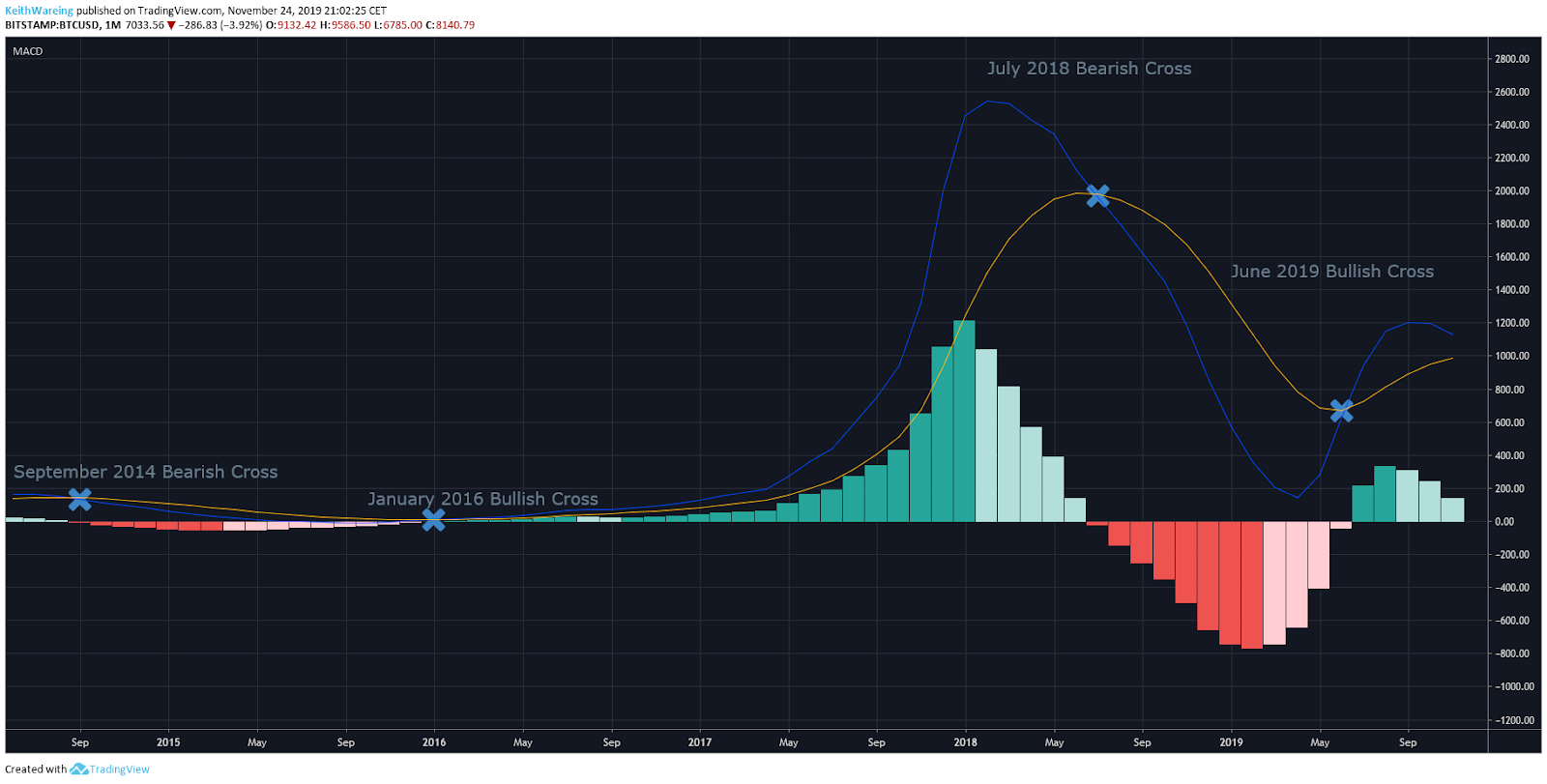 One indicator that stands between the bulls and the bears right now, is the moving average convergence divergence (MACD). There is only a week left until the monthly candle closes, and if selling pressure continues to increase for Bitcoin then the MACD looks set to cross bearish by January. This is not a drill, this is happening and this is not good for the bulls.

The MACD can blow open at the last minute on lower time frames, however, this seems unlikely given that the indicator has only crossed 4 times in the last 5 years on the monthly time frame.

Is the situation better on the weekly MACD? 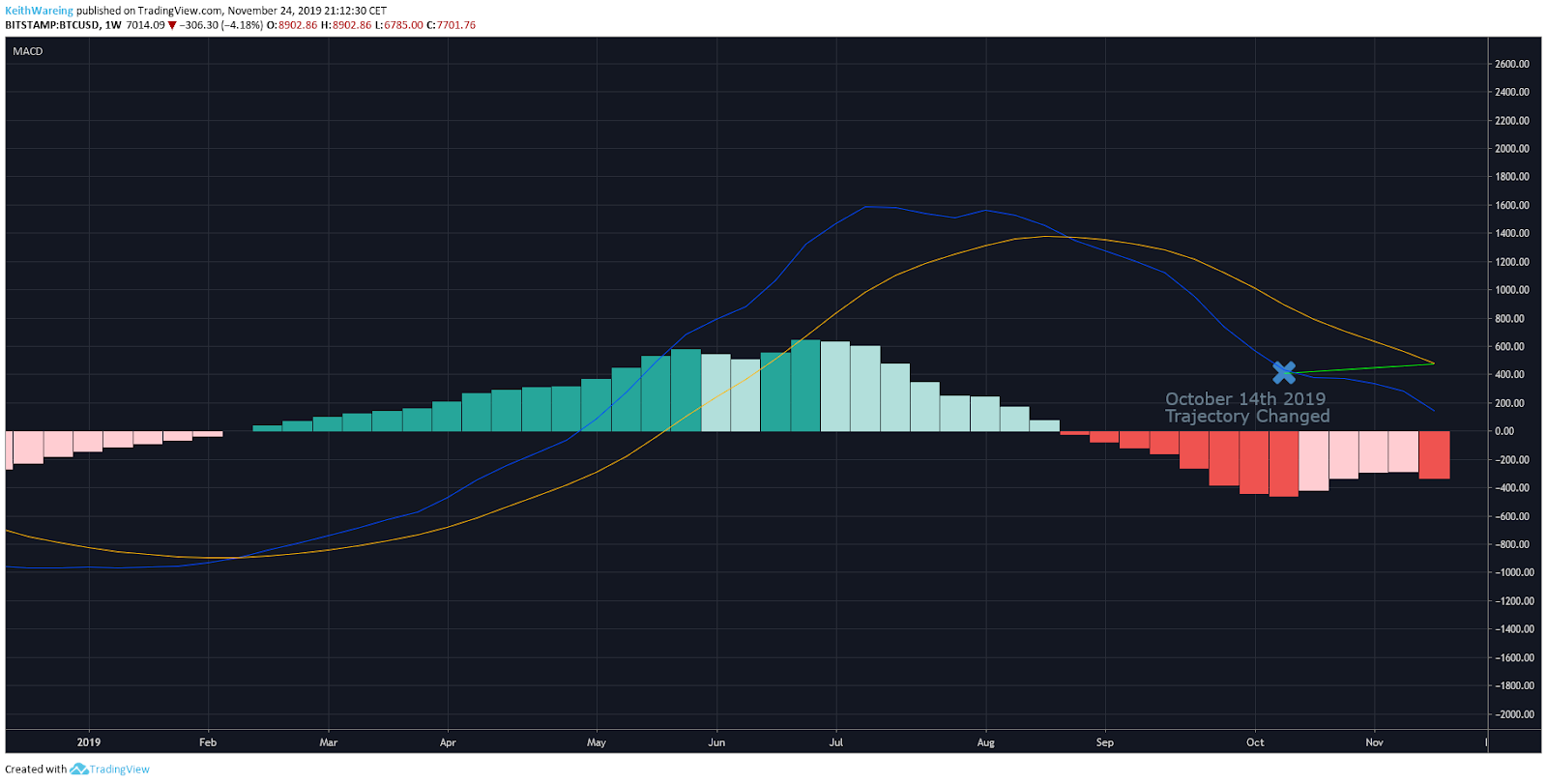 The weekly MACD does not look much better either. The MACD is currently blowing open, after changing its trajectory on Oct. 14. If Bitcoin had maintained upward momentum investors would be looking for a bullish cross at this time, however not even the monster price pump at the end of October was enough to pull the digital asset back into bull territory. 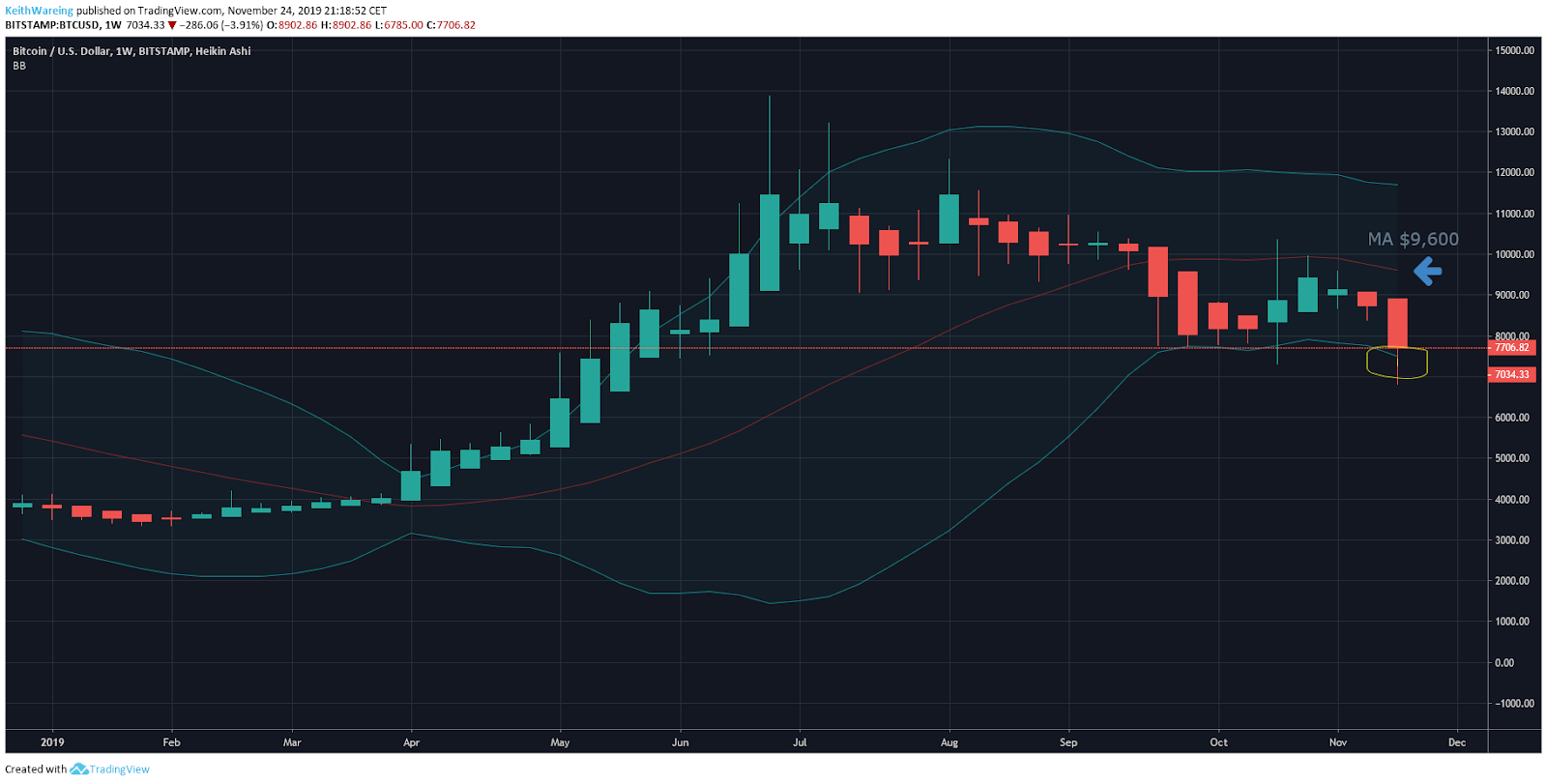 The week ahead will be an interesting one. As can be seen on the Bollinger Bands on the weekly chart, Bitcoin has already penetrated the $7,500 support. This means next week as the new candle forms, it will open up the range slightly.

At present the moving average serves as a solid level of resistance at $9,600 today, however, this is likely to be nearer $9,500 tomorrow as the Bollinger Bands broaden.

Should Bitcoin have a relief rally when the markets open next week, the first port of call will be to reclaim the support on the Bollinger Bands which is around $7,350. From this point, Bitcoin will need to hold $7,350 for there to be any light for the bulls.

There are more factors at play here than just the charts. Every time frame looks bearish and Bitcoin has very little preventing it from heading down to the $2,500 – $3,500 range from a technical perspective.

However, 2019 has been a bumper year for investors that bought at $3,500, and much of the selling pressure could be attributed to people taking profit in large chunks, rather than dollar-cost averaging in and out as the more seasoned investors do.

That being said, if one was a whale that had made 400% gains between February and July 2019, wouldn’t it make sense to spook the market at the end of the year in order to repeat the process again in 2020?

The bull in me wants to believe that Bitcoin price is ranging between the Bollinger Bands on the monthly chart but the digital asset will first need to reclaim its previous support of $7,350 to ensure that the slight wick below the moving average can be ignored. From here, $9,500 is the next level of resistance, should this be broken, investors will feel more confident that Bitcoin could close the year with a 5 digit dollar value.