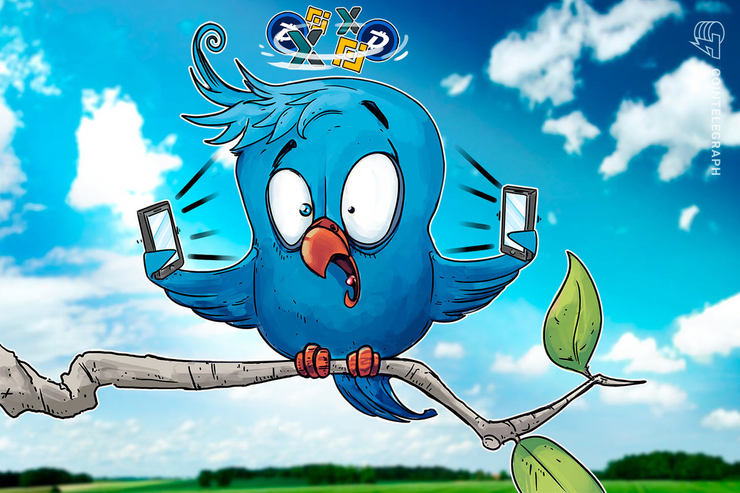 What started as a Twitter thread of frustrated complaints about corruption and centralization in the crypto industry ended with an abrupt announcement: the delisting of DigiByte on Poloniex. Jared Tate, the founder of DigiByte, once among the most popular coins traded on the exchange, sat down with Cointelegraph to share about his concerns following the debacle. 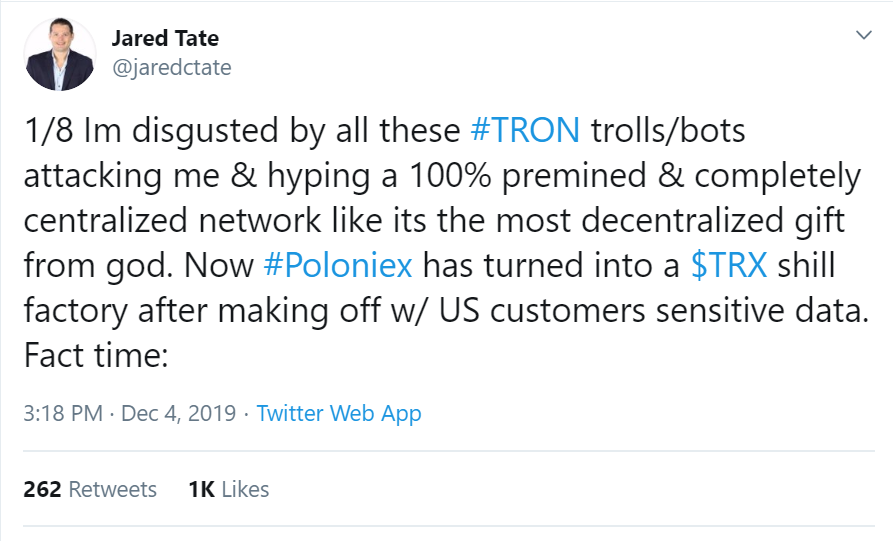 The acrimonious relationship between Tate and the larger forces of Binance (and most recently, the Tron-acquired Poloniex exchange) traces back to a different era in the crypto industry. It was 2017, and markets were on fire. Binance was growing by leaps and bounds, becoming the most popular altcoin exchange in the world. Being listed on Binance was like having a license to print money.

It was in this environment that DigiByte first entered as a prospective listing on the new exchange, with Tate advocating for its addition to the growing library of assets offered by Binance. Binance showed interest in using DigiByte’s DigiSign technology as part of its launch process, Tate said, following China’s exchange shutdown. “We helped promote them. They had a Twitter poll where they said they would list DGB, we won it, and then they started pulling shenanigans, asking us how much money we had.”

Tate alleged that Binance expected substantial fees in the hundreds of thousands of dollars to be paid for the privilege of listing DGB on the popular new platform. “It’s not that people were opposed to paying Binance’s listing fees — we flat out couldn’t. There was no marketing budget,” he said. Thus, DigiByte was never listed on Binance, creating considerable angst in the community, especially after having such high hopes for the lucrative opportunity.

Fast-forward to Fall 2019, when, according to Tate, Binance again approached him about listing DigiByte on the new U.S.-based trading platform, Binance.US. “They said they would list us, respect us; that everybody would let bygones be bygones. They requested I get on a video call with them. I told the community, ‘Look if they make any crazy demands, I’m not going to go for it.’ I was told they wouldn’t make any crazy demands. Sixty seconds into the call, they’re asking for $300,000 and 3% of all DigiBytes.”

Tate wondered why Binance would approach him at all, considering their past negative experiences. “90% of the crap that’s out there, they couldn’t list on the new Binance.US platform. So I think they were maybe using us to promote their new platform? You wonder, did they intentionally do that? They legitimately think this whole thing is nothing more than business. It’s a difference in values.”

When Binance CEO Changpeng Zhao was challenged on Twitter regarding the listing fees in September, he was dismissive, yet did not deny the allegations, stating he was “not gonna waste any time on these types of guys.” 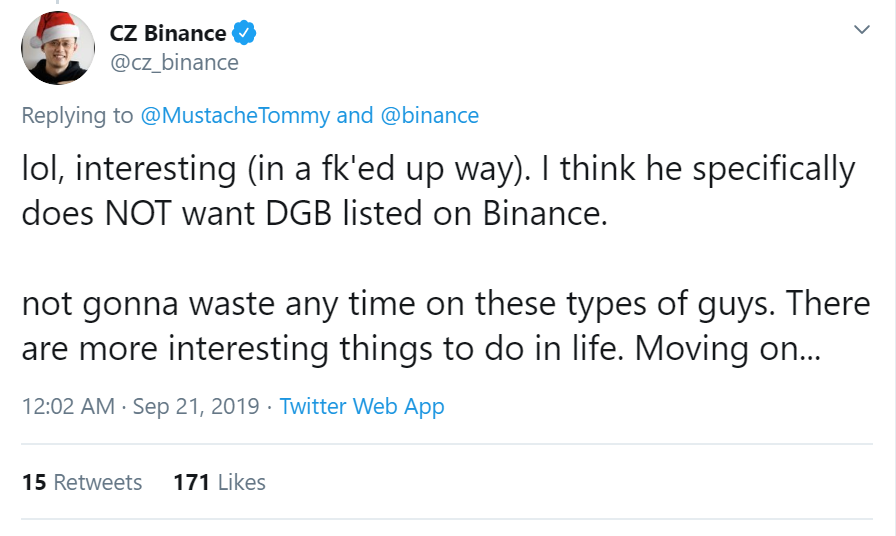 Via a “Binance Listing Tips” article originally published in October of 2017, Zhao had advised listing applicants to follow the prescribed process and to respect a “strict” NDA, particularly forbidding the disclosure of listing information. Another tip advised, “It is a bad idea to ‘try-to-pressure’ Binance into listing your coin by spreading FUD or negative comments about Binance.” The blog also noted that all listing fees would be donated to the Binance Charity Foundation, a “100% transparent charity tracked on the blockchain.”

Paying tribute to a handful of tycoons

When working on his book, “Blockchain 2035: The Digital DNA of Internet 3.0,” Tate explained he had a “reality moment” seeing how much the blockchain space has changed in just two years. Certain behaviors and expectations that would not have been tolerated previously have been normalized, he said. Tate pointed to examples of projects consisting of completely pre-mined supplies and massive marketing budgets, which have turned into “hype machines.”

He believes blockchain technology can empower a brighter future for humanity, letting users take charge of their own financial futures and personal data. “But if the whole industry is run by a handful of tycoons that you have to pay tribute to, to get anything done… it’s scary.”

Tate said people should support whichever project they want, whether it’s a genuine decentralized project or a 100% pre-mined centrally controlled hype machine. “But when that same project is masquerading and presenting itself to the mainstream financial media as a truly decentralized system, yet it’s far from it, to me, that’s just not right.”

Upon hearing that Poloniex had been sold to Tron founder Justin Sun and a group of Asian investors, Tate publicly expressed concerns regarding data privacy. He was particularly bothered that the company neglected to mention how personal client data would be handled. “This is more personally sensitive information than anything Facebook or Twitter or any other social media site gathers about you,” said Tate.

Tate expressed concerns about SIM-jacking attacks, noting that exchange customer data tends to be a highly desirable target. “This kind of data especially in different hands or dare I say — governments — who knows what it might be used for?” When Tate reached out to Poloniex about these security concerns, he said he received no response.

On Twitter, Poloniex responded to Tate’s thread of criticisms, stating that they do not own any US customers’ data, “as all of them are preserved by Circle,” the previous owner of the exchange. It was in this same tweet that Poloniex announced the sudden decision to delist DGB. 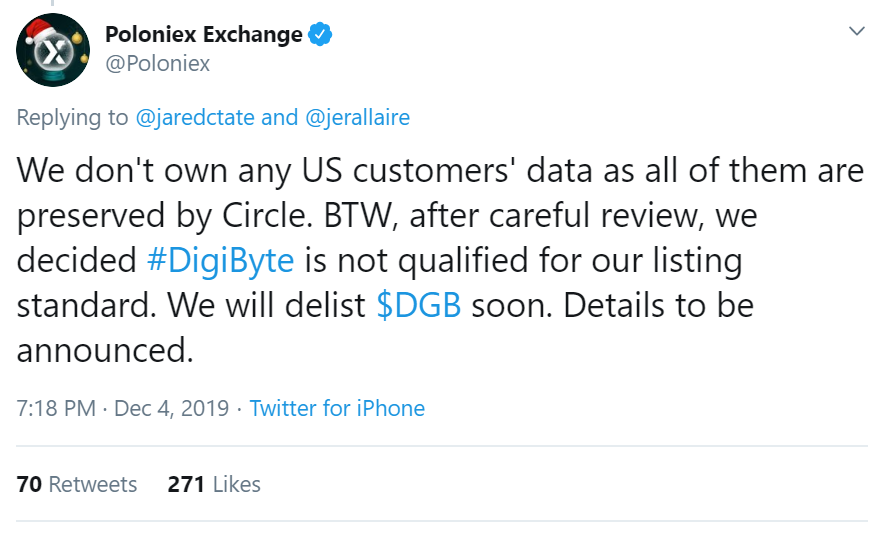 “It’s sad,” he continued. “At one point, Poloniex was probably the best exchange in the world. It is very disappointing to see that this new group took over and to see the way they’ve conducted this whole thing.” What really triggered Tate, he said, was when he saw a since deleted Poloniex tweet reading “Just buy TRON.” In addition, tweets promoting free listings for all projects built on TRX “did not bode well,” said Tate.

Regarding the sudden delisting of DGB, Tate responded, “These exchanges, like Poloniex, have made millions of dollars trading DGB over the last 5 years.” On a number of occasions from 2015 to 2018, DigiByte was the asset with the highest trading volume on Poloniex. Tate said the decision was irrational. “From a business perspective, it doesn’t make any sense.”

Tate insisted that any one delisting can’t kill DigiByte. The cryptocurrency appears on over 100 exchanges globally. “There is no budget to cut or employees to fire. The network runs itself,” he said.

Moving forward with or without Binance and Poloniex

Tate noted that the heart of the problem is a lack of understanding of, or interest in, true decentralization. “The fact that Binance would think we could just send them 3% of all DigiByte in circulation and $300,000 lets me know they truly do not understand what decentralization is.”

Despite the negative experience, Tate sounded hopeful for the future. He is looking to decentralized exchanges as the likely way forward, but anticipates a long road ahead. He expects further monopolization and consolidation in the industry, accompanied by a possible crash before things turn around. “Things might get worse before they get better. Eventually, it comes down to DEXs. To make this a decentralized ecosystem, it needs decentralized exchanges and interoperability between chains.”

Tate said, “Within 24 months, as regulators clamp down, I think you’ll see one or two leading DEXs emerge that take over as the largest source of liquidity for the markets.”

“The problem is,” Tate continued, “there aren’t enough people speaking out saying ‘this is crap,’ or they’re getting drowned out by fake Twitter bots and hype. Once people are educated, they’ll make the best decisions.”

Tate explained, “Satoshi said it himself in the whitepaper: ‘If this technology becomes reliant on a trusted third party, we’ve failed.’ It’s been hijacked, and we’ve lost what made this great to begin with.”

In response to the Poloniex fallout, the DigiByte community was overwhelmingly supportive, said Tate. About half a dozen exchanges have decided to add DGB to their listings since the incident, with a few more “in the works” according to Tate. “I just want to say thank you to all DigiByte supporters and the community. I would urge everyone in the space to support true decentralization.”

Both TRON and Poloniex declined to comment for this story.

3 cryptocurrencies that stand to outperform ETH price thanks to Ethereum’s Merge
Rivian posts second-quarter revenue above estimates, but expects a wider loss for the year
Scaramucci highlights key factors why crypto market will soon recover
With or without federal student loan forgiveness, colleges must tackle affordability crisis, experts say
Here’s where China’s real estate troubles could spill over