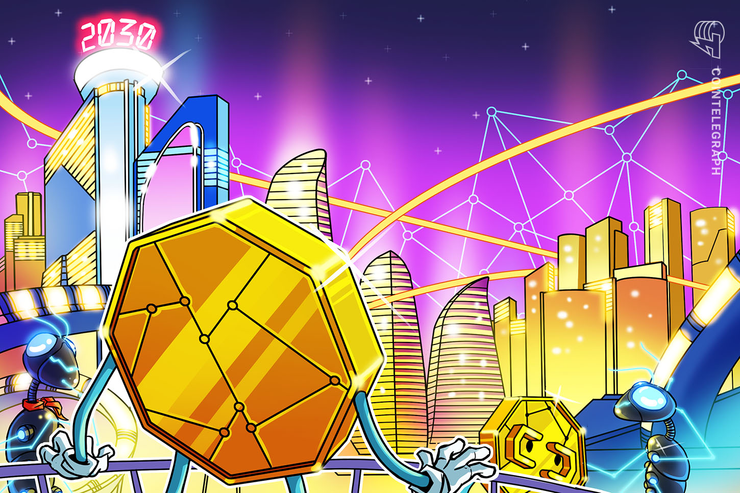 A recently unveiled Deutsche Bank “Imagine 2030” report boldly puts a date on the eventual fiat–crypto “social consensus flip,” citing the Asian continent and, in particular, China, to have already recognized the trend. If true, then what every cryptocurrency speculator and investor would like to know is, when will it happen? The current landscape is a predictor of the future.

The classification of crypto by Deutsche Bank includes central bank digital currencies, or CBDCs, which is worth keeping in mind while results are discussed. Certainly, the analysts behind the research hold a more positive belief that these moves toward centralized cryptocurrency solutions will replace fiat currencies.

The report concludes that the next step to avoid falling behind in the world’s economy will be a result of the fiat–crypto flip. The concept, while interesting, still comes with its flaws, such as the fact that global adoption, government acceptance, and massive leaps and bounds in cybersecurity technology would need to occur in order to even consider replacing traditional fiat with centralized (or decentralized) crypto assets.

If a CBDC currency from a major country turns out to be successful and the centralization strategy is implemented by other countries, most of these investors and traders will likely begin to look in its direction. All this movement is likely to drastically affect the blockchain industry, but may not necessarily drive mass adoption in the direction of decentralized currencies.

On the heels of Chinese President Xi Jinping’s announcement regarding the government’s interest in blockchain tech, the country has made clear its strong efforts to implement feasible plans that ensure individuals and businesses can make national and international transactions using this fast-growing technology.

However, the idea is not to trigger Chinese crypto enthusiasts to invest more in Bitcoin and any other decentralized currencies with an immutable ledger, but rather to mirror a more centralized focus in the direction of the People’s Bank of China, or PBoC, which plans to launch the world’s first national cryptocurrency.

The plan has been in motion for some years, and the PBoC has completed the prototype according to local officials. With the government’s support over the years, the pace of development can increase, scaling the creation and testing of this national currency to become a part of the closed Chinese system.

Gantig Bayarmagnai, CEO of Bitmonex LLC — a digital asset exchange based in Mongolia — discussed the future of the Chinese yuan and prospects of the social consensus flip with Cointelegraph:

“With the Chinese government taking the initiative by introducing their crypto Yuan early next year, we will most likely see other countries following suit. Countries like China, South Korea, and Japan will most likely see a quick transition to a crypto-based payment system because of their existing infrastructures and developed culture in accepting digital payments as the norm, as opposed to using cash for payments. It also gives the government full autonomy in monitoring all transactions with ease.”

Although clampdowns may loom from centralized currencies, the number of potential financial transactions that can be carried out through transitioning the Chinese economy to the blockchain is strong, with over 775 million employed persons in the country. But why exactly does the government want to create a centralized technology?

“Central bank tokens have a potential for mass adoption if done right. Driving a right balance between decentralization and inflationary measures is pivotal for central banks. These stable cryptocurrencies and central bank tokens may exist with fiat by 2030 but I do not think these will completely replace fiat but may coexist.

The warning signs for the future of these pseudo cryptocurrencies is present though, since the PBoC deputy director, Mu Changchun, made the statement at the China Finance 40 forum. He indicated that the new national currency to be launched would be operated in a two-tier system, with the PBoC on top, and commercial banks allowed in the second tier of the centralized system. This allows for full power of currency manipulation between banks, with the government overseeing it all.

Related: US and China Battle for Blockchain Dominance

During a conversation with Cointelegraph, Miko Matsumura, the co-founder of Evercoin, highlighted that given the power the People’s Bank of China seems to have, the report estimate is accurate. He further believes that the same phenomenon may occur in half of all countries by 2025. He went on to add:

Currently, the Chinese government can monitor all transactions and assets of individuals, similar to what their CBDC would be capable of. This is still very unlike what happens in a decentralized system, where everything that happens in the public ledger, like transactions, can remain anonymous.

Some point to Facebook’s Libra as the reason behind the increasing pace of China’s blockchain development. Libra itself is centralized through the wallet function, and as Mark Zuckerberg knows, the value is in Know Your Customer data.

The Chinese government likely sees the value of knowing and controlling valuable transaction data that can now include the flow of finances for the general population. Regarding this, entrepreneur and managing partner at Morgan Creek Capital, Anthony Pompliano, exclusively told Cointelegraph:

“The choice currency of drug dealers, money launderers, and terrorists is still cash.”

With all of this in mind, how crypto is classified will need to be more defined as more CBDCs enter the picture because they are (from a decentralized viewpoint) still fiat and centralized, just on the blockchain.

So, theoretically, what would need to happen for the Chinese CBDC to take over as the national fiat and eliminate the necessity for the original yuan to exist?

In short, the government would have to rid their nation of the yuan, giving citizens access to the resources needed to utilize the new digital currency. Thus, by eventually onboarding their citizens, the blockchain would gain billions of users. So, assuming Deutsche Bank is correct in projecting this to happen by 2030, the transition merely adds a pool of blockchain users which are one step closer to adopting decentralized currencies.

“Since central bank coins are counted in [the Deutsche Bank 2020] prediction, then I totally agree [on the eventual fiat–crypto social consensus flip]. Just as large financial institutions are experimenting with digitizing securities and creating their own tokens and coins, I think progressive governments will start doing that more and more. It’s a natural progression for everything to be digitized and I think that the cat is now out of the bag and they will have to create their own tokens to (try and) retain control of financial systems.”

In a situation like this, a currency swap between centralized currencies that can also provide access to the decentralized currency ecosystem on the blockchain will add the most value. Enterprise solutions like XRP or consumer solutions like Element Zero Network serve as the middle ground between currencies at little cost without spreads, unlike the current forex trading model.

On the matter, Cointelegraph spoke to Michael Creadon, the head of institutional sales at DrawBridge Lending. Creadon believes that, “Decentralization is a noble goal but it has its limits.” He went on to clarify that if one wants to engage with Bitcoin in the United States, they would have to deal with multiple governmental agencies and watchdogs. He continued:

“This is not a good thing or bad thing. It’s reality. You can see the pendulum swinging back away from decentralization towards centralization at a blinding speed. Look at Libra; how’s decentralization working for them? But like anything, the answer is probably closer to the middle.”

Apart from this, the CBDC is not intended to be a quiet coin, as PBoC’s director asserted; it is such that in years to come, this centralized cryptocurrency can fullysubstitute fiat.

Elon Musk: US ‘past peak inflation’ after Tesla sells 90% of Bitcoin
Curve Finance resolves site exploit, directs users to revoke any recent contracts
Ethereum price rises by 50% against Bitcoin in one month — but there’s a catch
Good news for Bitcoin: New CPI data suggests inflation has peaked | Find out now on Market Talks with Tim Warren and Caleb Franzen
Biden has promised a student loan forgiveness decision this month. Here are 5 things borrowers can do while they wait